I will NEVER have a baseball video game in my house! 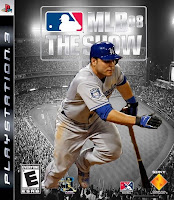 I wouldn't do anything else but play it.

I'd neglect my kids.
My wife would leave me and I'd never know it.

I'd go broke.
I would be sitting in tattered clothes, beard like Tom Hanks in Cast Away, playing it over and over.

Hell, when I had Hardball back in the 1990s I was hooked.

Have you SEEN the graphics for The Show 09?

Good god it is so real that I think the players have actual feelings.
And do you know what?

In 10 years these graphics will be considered to be quaint.

And at least by playing these games you can see the impossible... like the Cubs winning a World Series.

Listen to this guy call the ending of a fake World Series.
He's pretty into it. (I shouldn't throw stones... I did the same thing playing Digital Diamond as a kid!!!)