A-Rod tested positive for 'roids? I'm sure New York will give him a pass 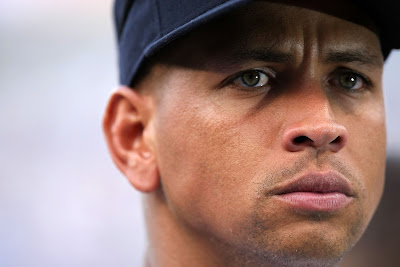 ESPN is reporting that Alex Rodriguez tested positive for 'roids in 2003.


Here are my initial thoughts: 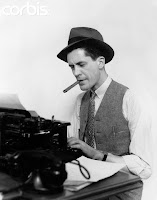 - GEE I WONDER IF THIS WILL GET ANY ATTENTION?

And New Yorker reporters are kind of bored since the Giants playoff run ended. The Knicks are sub .500 and hockey doesn't sell papers.

The New York press will look at this stories like a shark heading to Amity Island.

When the Yankees fork out so many millions of bucks, this is the element that nobody thinks about. The insane pressure and the news cycle.

Even someone as great and seasoned as Randy Johnson couldn't hack it!
Now these three guys are supposed to bring a World Series title to New York and they are about to enter a clubhouse that is going to be as pleasant and calm as the end of Scarface.

- HOW HAPPY IS JASON GIAMBI THAT HE IS OUT OF NEW YORK NOW?

He'd be fielding so many questions about this, maybe even DURING a game.
In Oakland, the spring training media is one guy from the Merc and someone from KNBR.

It's a little different.

- WE CAN'T ACT TOO HOLIER THAN THOU ABOUT STEROIDS

I already wrote about how I think the 'roids era was bigger than Bonds.

If I found out the people who produce for the shows that I want to produce for got ahead by using an illegal drug, I'd probably take it too. 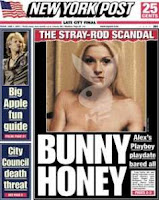 A-Rod get controversy when he yells HA! at a third baseman.

He can't get love when he wins the MVP.

This could get ugly really fast.

- HANK AARON IS LOOKING BETTER AND BETTER, ISN'T HE?


Aaron never got the credit he deserved during his career and always is overlooked when people rate the best players ever.

But it took one (alleged) juicer to break his record and another one to chase it to make us all realize how great he was. 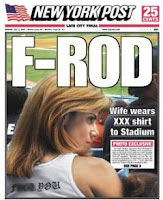 - CYNTHIA RODRIGUEZ MUST BE LAUGHING HER F---ING A-- OFF

Laughing while living in their old Coral Gables home spending hundreds of millions of dollars. 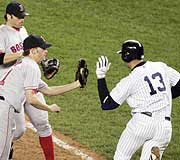 Come on!
Show some REAL rage!

He wasn't exactly loved in New York as it is with his 2 MVPs and 1 post season RBI in his last 16 post season games.
And he chose to come back!
For 10 years!

Does he really think he's going to be happy here in 2018?

- MADONNA HAS A TASTE FOR STEROID USERS


And speaking of that... 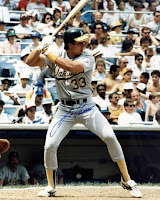 - JOSE CANSECO HAS BECOME THE E.F. HUTTON OF BASEBALL!

I wrote before that when Canseco speaks, we should listen.

Well, he said A-Rod used to juice.
And after writing a book where EVERYTHING he said turned out to be true, what was everyone's reaction?
"Oh he's full of it."

If he told me black was white, up was down and Grey's Anatomy doesn't suck, I'd believ ehim.