How could Alex Rodriguez's Spring Training Get Worse? 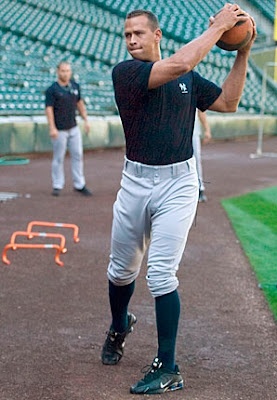 Usually spring training is a time to shake off the cob webs and have a fresh start for the new season.
For Alex Rodriguez, Spring Training 2009 has been as optimistic and stress free as Griffin Dunne's night in After Hours.

Remember when the controversies around A-Rod were things like "Hanging out with strippers", "shacking up with Madonna", "bombing in the playoffs", "opting out during the World Series" and "a jaw droppingly awkward divorce"? Do you know what A-Rod calls that period?

Since leading the Yankees to a third place finish last September A-Rod has...

- Been the subject of Joe Torre's book, and not in a good way.
- Said a fib or two to Katie Couric
- Said a fib or three to Peter Gammons
- Said a few more fibs to every reporter in the tri state area
- Threw his cousin under the bus in the steroid scandal
- Became the new face of steroid abusers
- Continued hanging around the most notorious steroid supplying trainers AFTER he claimed he was clean
- Got flack for picking The Domincan Republic instead of the United States for the meaningless WBC
- Got flack for complimenting Jose Reyes in said meaningless WBC.

And now it looks like he could be out until JULY with a hip injury that probably could have been treated in the off season.

But cheer up A-Rod.

The following things haven't happened to you:

- You have not been named one of the Worst Dressed Celebrities from Esquire.

- Nadya Suleman hasn't claimed you are the father of the Octuplets.

- No DNA connects you to both Nicole Simpson and Ron Goldman.

- You haven't been blamed for the housing crisis.

- Chris Brown hasn't said publicly "A-Rod told me to do it!"

- The former Reverend Ted Haggard hasn't claimed a long term relationship with you.

- The New York Post hasn't issued a statement saying "That chimp cartoon was suggested to us by A-Rod."

- A new role of film hasn't been discovered in the Zapruder home, clearly putting a very young you on the Grassy Knoll.

- The Bachelor hasn't claimed that his switcheroo was A-Rod's idea.

- You haven't been attacked by a werewolf, turning you into a flesh eating beast at each full moon.


But then again, it's early.

At least three of these could happen by St. Patrick's Day.