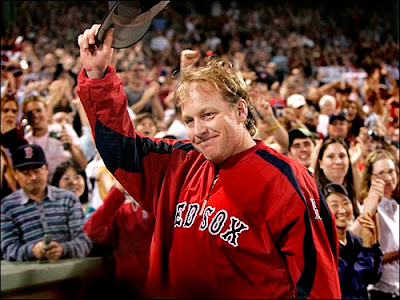 Thank you Schilling for backing up your talk and delivering.
Sure you were a bit of a blow hard, and no I don't care about your stance on Stem Cell Research. But do you know what? If being a blow hard also made you a big game pitcher... that it was all worth it!
Theo ate that lousy Thanksgiving dinner for two reasons:
Get Schilling to Boston and become the grand Yankee slayer that all of Red Sox Nation craved.
and short of that...
Keep him AWAY from New York!
He came to Boston and while he couldn't keep his mouth shut (or quit updating his blog) he also got it.
The product of the Sox farm system (thus homegrown) understood that the Red Sox didn't just want to have a good pitcher... they wanted one who understood that winning a title in Boston meant more than winning one in Arizona.
He not only understood where winning in Boston would put him historically, but also knew that relating to the Boston fans in that title would put him with the immortals.
Slaying the Yankees in a Diamondbacks uniform got him cheers.
Slaying the Yankees in a Red Sox uniform would put him in the same sentence with Paul Revere and John Hancock of Boston heroes.
And he publicly hated the Yankees, trashed talk against the Yankees... he felt the Red Sox pain.
Ironically the Conservative Christian channelled Bill Clinton!
I was there that magical Game 6 where he pitched with the bloody sock. And whether it was blood or not, what is undeniable is he had surgery just before the start and shut down the mighty Yankees to one run over seven innings.
Yankees slain... quick work of the Cardinals... immortality? Check.
A 6-1 post season record as a Red Sox in 8 starts with a 3.30 ERA (keep in mind that includes his game 1 shelling in the 2004 ALCS) and leaves the game not in a contract dispute or throwing for the Royals...
His last image as a Red Sox was winning Game 2 of the 2007 World Series.
Quite a way to go out!
Thanks for coming through more than we could ever have dreamed!
Now keep your politics to yourself!
Posted by Sully at 9:57 AM