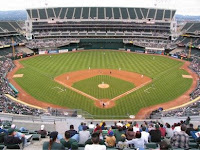 It's looking more and more like the A's and the Marlins won't be getting their new stadium deals.
And it's hard to argue for building a park these days.

I mean schools are falling apart, the infrastructure of the country stinks and we need to find something to manufacture in America so we don't have to get government stimulus every 2 years.

Building a park I am guessing isn't the smartest use of tax payer money these days.

And at the same time, you can't blame the A's and the Marlins for wanting out.

Granted the two franchises have combined for six World Series titles in their lousy stadium... or as many as the Phillies, Cubs and Indians have won since 1903 combined.

They put competitive teams on the field, yet the stadiums are more than half empty because they are FOOTBALL STADIUMS!!!

And the new park for the A's looked bitchin' in the artist renderings...

And maybe a cool (literally) retractable roof park in Miami would make the Marlins a draw. 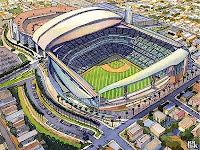 But when the owners start to talk tough about leaving town, there's a simple question:

Where are you going?

Is there a Major League Stadium sitting empty that I am unaware of?

It's not like moving a football, basketball or hockey team. There are plenty of huge college football stadiums that could share an NFL tenant while a new park is built.

Heck, an NFL franchise could move to Boise tomorrow if they don't mind playing on blue turf.

You could move a hockey team to Lubbock Texas tomorrow if they put ice down in the 15,000 seat United Spirit Arena.

But college baseball isn't as big as college football or basketball and there physically wouldn't be a place to play!

Seriously... where's a baseball team supposed to move to?

Let's take a look at the biggest American TV markets without a team.

There is a 9,500 seat minor league park in the Walt Disney Complex... and it basically is unused most of the year. It's too far from the city of Orlando to get regular fans, you have the Disney World traffic and the Rays are too close and would sue the Marlins or A's to the ground before you can say "Jiminy Cricket." 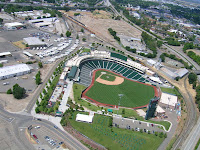 Raley Field seats 15,000. Put some temporary seats in the outfield and boost capacity to 30,000 and it could work.

Then again, California is handing out promissory notes for unemployment benefits and they are having trouble keeping fire departments afloat.

And Sacramento isn't as affluent as the Bay Area, who looks like they are rejecting potential A's stadiums in Oakland, San Jose and Fremont.

PGE Park in Portland seats nearly 20,000 and it probably can be reconfigured to seat 10,000 more.

But it rains every day during the spring and early summer and they'd have to build a retractable roof park. And Oregon isn't exactly swimming in dough these days (who is?)

Normally Portland would be a big player, but not today.

The current Knights Stadium can seat 14,000 people, but they are trying to build a new one. The minor league park has become a hot potato issue politically. I can't imagine a big league park getting approved any time soon.

Plus North Carolina isn't exactly baseball country. I could be proven wrong... but probably won't be any time soon. 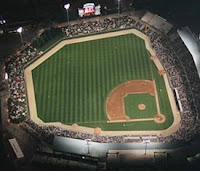 Indy seems like a great sports city and everyone has gone gaga over Victory Field, home of the Indianapolis Indians.

But the Pacers and the Colts have new digs and I am pretty sure building a THIRD sports venue won't be a high priority in these times.

Sure the new Bulls park is nice, but as we really ready to turn Durham into a MAJOR LEAGUE city?

Would Annie Savoy even be able to get a decent seat?

Forget a Major League park. Greer Stadium in Nashville barely fits the standards of a minor league stadium. Cramped and falling apart, it won't do for a big league franchise.

On the positive side, it has that bad ass guitar scoreboard! 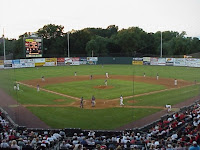 The closest team to Hartford is the New Britain team. They have a relatively new park (I had seen a game in the old rickety Beehive Park in 1994.)

On the other hand, it would be cool to have a big league club so close to ESPN.

They haven't played a game yet in new Huntington Park and you want to remodel it?

Also, I am under the impression that there are already two baseball teams in Ohio.

They already have a double tiered stadium in Franklin Covey Field and it wouldn't take much to make it a 30,000 seat park.

One slight problem... playing games in April!
It's bad enough that Denver is sitting in the snow and high altitude. Are we REALLY going to call Salt Lake City a major league city over MIAMI??

I keep hearing how Albuquerque (which is a nice city, by the way) is growing in leaps and bounds. And getting a big league team would show they are a big league city.

And the Isotopes Park, with its upper deck and good views, is as good a minor league park as there is.

But could the big leagues work in the desert in an open air stadium. Plus the desert cities are transplant cities and not prime for new fan bases. As I wrote before, the Diamondbacks haven't really caught on yet! 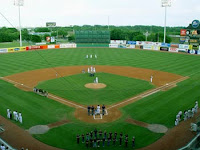 The San Antonio Missions currently play at Nelson Wolff Municipal Stadium. It seats 9,000 and there is room for 90,000 more. Do you know why?

IT'S IN THE MIDDLE OF NOWHERE!!!

When I found out where it was located, I kept hearing in my head one of the most underrated lines from This is Spinal Tap:
Why are we going to an Air Force base?

Could Alabama really support a Big League Club?
Is it really wise to abandon South Florida and the San Francisco Bay Area for Alabama?

Look, I LIKE Alabama. I've had nice experiences there and the people are nice. But is it a big league city?

Then again Regions Park was once the home field for Michael Jordan when he played baseball in 1994.
It was major enough for His Airness!

Cashman field is small, but that doesn't matter. Things get built so quickly in Las Vegas that I am convinced that there have been two hotels constructed since I started typing this sentence.

But, with baseball so sensitive to gambling, would they REALLY want a team in Vegas?

Maybe Pete Rose can throw out the first pitch!

So there is no slam dunk city to move to.
Baseball already expanded into the only viable cities and the Expos moved into the last available big league park when they became the Nationals.

So here is my prediction:

The Oakland A's will remain in Oakland.

The Florida Marlins will remain in the Miami area.

And the frame work for success will come the same way it came for the Giants and the Mariners.
Remember both of those teams wanted out of their crummy stadiums and threatened to move.

The Giants were practically printing tickets for Tampa Bay.

But both teams stayed... both teams turned their fortunes around with a great run (the Giants in 1993, the Mariners in 1995).
They energized the fan bases and got plumb stadium deals.

Then again, the economy was better in 1995 than it is now.
So come on, President Obama! Get this economy kick started.

The future of the A's and Marlins depends on it!