White Smoke! Manny must have been resigned

Manny Ramirez finally thinks that $45 million is worth playing for. OK, so it's not that much more than he would have got from the Red Sox had they picked up the two options... but at least the circus is over (and I am still glad that this wasn't the big issue in Red Sox camp!)

Well this changes everything doesn't it?

I mean how can anyone pick a team other than the Dodgers this year? 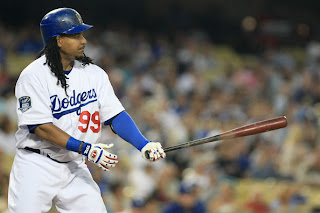 This puts them heads and crazy shoulders above everyone else in the NL West.

Yes I know the Giants have lots of pitching... they can't hit.

Yes I know the Diamondbacks have lots of young dynamic talent... they have no centerpiece to their line up.

Yes I know the Rockies were the NL Champs just two seasons ago... that's looking more and more like a fluke.

I love love LOVE how this Dodgers team is set up.

Pitching wise they are LOADED with young talent.
Chad Billingsley is only 23 and is already a legit #2 with playoff experience in '06 and '08.
Young studs Clayton Kershaw and James McDonald are also in their early 20s and have tasted the post season too.

Jonathan Broxton looks like their young stud in the pen. He's only 24 and has pitched in the playoffs two different seasons and became the first Dodger pitcher since Orel Hershiser to close out a playoff series.

Hong-Chih Kuo is also a veteran of two playoff teams in his twenties and gives Broxton a good set up man and Cory Wade looks like he'll fit in nicely to the pen as well.

If they can get anything out of Hiroki Kuroda, Jason Schmidt and Claudio Vargas, it will only make them deeper.

And now the line up, filled with home grown potential stars like Russell Martin, James Loney, Matt Kemp and Andre Either* and veterans like Rafael Furcal and Casey Blake have the centerpiece. The pressure will be on Manny, and he can hack it because he doesn't care... and I mean that as a compliment.

And the craziness of Manny will also deflect any attention that Joe Torre might have from that book.

And the Mets are going into the season with a huge hole in their line up... and fans can curse Bernie Madoff for keeping the Mets from being players in the Manny sweepstakes.

And the Giants missed out on a chance to have the second biggest distracting superstar in left field of the decade.

I would say this pushes the Dodgers into the World Series...
But remember one fact:

No team that has Don Mattingly in uniform can play in the World Series.

If Manny can beat the Curse of Don Mattingly, then he is a powerful prescience indeed!!!

*Yes I know that Andre Ethier isn't technically homegrown, but cut me some slack