Hey Marlins... do you REALLY want to alienate your MVP candidate over his hair?
Really? That's where your priorities are now? You can't draw fans, you play to empty orange seats despite putting a winning product on the field and you want to get on the bad side of potentially the best player to put on the uniform?
I'm not saying the inmates should running the asylum, but what's the difference if he grows his hair long?
And spare me the whole "it's important to look professional" garbage.

The Oakland A's in the 1970 looked like slobs and they won three straight World Series.
There have been a lot of teams with clean shaven faces and short haircuts that lose 100 games.
It's not about grooming. It's about winning games... and if your MVP candidate wants long hair, then why not?
I remember during the 2004 ALCS, when the Yankees took a 3-0 lead, a lot of the writers starting blathering on about "See... it was the professionalism and class that the Yankees projected that made them champions while the hairy slobs known as the Red Sox showed they didn't have what it took to win."
Suddenly the Red Sox won 4 in a row and the same writers would say "the carefree attitude of the Red Sox carried them while the buttoned down Yankees were wound too tight."
Well which was it? 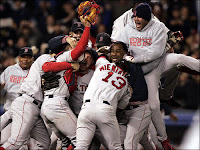 How about this answer?
NEITHER WERE RIGHT! The Red Sox pitching stunk in games 1 and 3 and suddenly it got great.
I think Keith Foulke's arm, Curt Schilling's ankle, Kevin Millar's eye, Dave Roberts legs and David Ortiz's bat had a lot more to do with the win than their hair.
And I think the Yankees lost not because they had short hair but because their best pitcher for Game 7 was Kevin Brown!

So what difference does it make if Hanley Ramirez grows his hair out, provided he plays well?

It doesn't make a team better or worse.

It was expressed best by the profound John Kruk. When he played for the slobs known as the 1993 National League Champion Phillies, a group of reporters asked him about their unkempt appearance and if it helped them win.

Kruk replied "We dressed the same last year, but nobody wrote about us when we stunk."