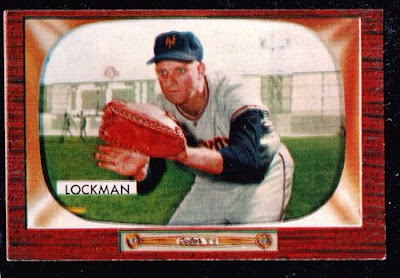 The "Shot Heard Round The World" by Bobby Thomson was a three run homer that won the 1951 Pennant for the Giants.
But lest we forget who hit the one out RBI double that chased Don Newcombe and forced Dodger manager Charlie Dressen to make a pitching change.
Whitey Lockman kept the wheels turning that inning...
And the former All Stat first baseman not only hit a key three run homer in Game 3 of the 1951 World Series...
And not only was the Giants lead off hitter in the 1954 World Series, the last one the Giants have ever won...
But he was also one of my dad's favorite players.
Rest in peace Whitey Lockman... you did "Run Like The Wind If Thomson Hits One."
Posted by Sully at 9:46 AM