Would Cleveland State take the pressure off of the Indians, Browns and Cavs? 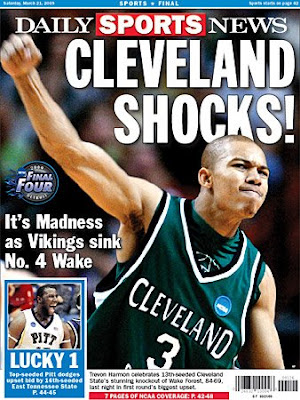 Imagine if Cleveland State wins the NCAA tournament!
Picture it.

Not only would it screw up people's brackets from across the country, but I have a philosophical question to ask Cleveland fans:

Would that count as a title for Cleveland?

As we all know and as I have written, the city of Cleveland hasn't had a champ to call their own since the 1964 Browns.

And the Browns, Cavs and Indians have been title-less ever since. Even in the Major League movies.

Who would have imagined that hope would rest on The Vikings?

Now look, I know this is more than a long shot. It is damn near an impossibility for a 13 seed.

But they have to beat a 12 seed in Arizona and suddenly they are in the Sweet 16!
And assuming they'd play Louisville... they'd have to pull off another upset... but they could.

And then they'd play either USC, Michigan State, Kansas or Dayton.

Well, they already beat Wake and Louisville... not implausible now.

So now Cleveland State is in the Final Four!
Taking on probably either U. Conn (my mother's alma mater) or maybe Memphis or Missouri.

They catch them napping and suddenly they are in the title game...
All the marbles for the NCAA title...

Cleveland State vs. UNC, or Pittsburgh, or Duke, or Syracuse, or Oklahoma...

Norris Cole pulls up and hits one at the buzzer... Cleveland goes wild.

And they have a sports title that unites the city.

OK, I admit, I had no idea who Norris Cole was until about 3 minutes ago.
In truth I didn't know that Cleveland State's team was called the Vikings until this morning.

And this scenario has as much chance of happening as Steve Wozniak has of actually winning Dancing with the Stars.

But Woz made it past the first cut... as did the Vikings.

Cleveland fans, allow yourself to think of that scenario today. Have fun with it because it could all end tomorrow... But that Sweet 16 is beating one 12 seed away.

After 45 years, you deserve some unreasonable optimism.