Hope you are enjoying the second AND LAST World Baseball Classic! 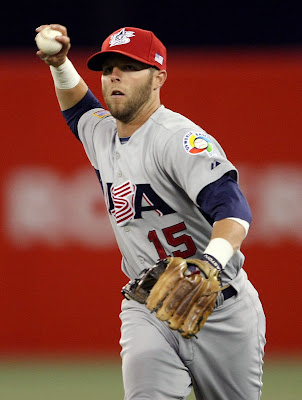 Hope you enjoyed a tournament where players played for PRIDE OF COUNTRY!

I hope you enjoyed a meaningless exhibition where the best teams were playing at half speed, and over 50 American stars either said "No Thanks" or were forbidden to play by the teams who will pay them millions of dollars.

Because it isn't happening again. And like the USFL, I can't imagine it will be missed.

BE HONEST! You may have watched an inning or two, but mainly you were holding your breath that the guy on your team didn't get hurt!

When I saw Dustin Pedroia had an injury playing these silly games, I washed my hands of it.

I love America and I root for American teams in the Olympics and the World Cup. But guess what? I would rather watch the Red Sox win the April 17-19 series against the Orioles than see the USA win Bud Selig's little experiment.

Hey Met fans! Your team had their second straight monumental collapse last year. Don't you think having a little cohesion in spring training would be nice? Well, 12 of the Mets predicted 25 man roster are playing these silly games in front of empty seats.

Hey Yankees fans! With all the expectations and the craziness in Yankee land, wouldn't you rather have your captain playing with Cano, Teixeria and which ever shmuck winds up playing third base than high fiving Youkiliis and Pedroia?

And now after employing the "Mercy Rule" when the USA got their butts kicked the other day, manager Davey Johnson is talking about a possible forfeit of Team USA if the injuries continue to pile up.

And in the end, only Korea, Japan and Cuba will care! They have the most to gain either by picking up a nice paycheck (Dice-K cashed in on the last one) or reminding us there is a great untapped reservoir of talent in Cuba.

But once again America won't be playing in the final if the injuries keep up... once again the final game will be played with players that nobody has ever seen.

It looks great on paper but so did the new Star Wars movies.