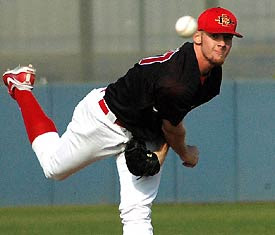 So Scott Boras claims that Stephen Strasburg is a once in a decade talent worth $50 million.
I'm not one of those people who thinks Scott Boras is evil. He's an agent. And it is the job of an agent to get their client as much money as possible. So why not hype Strasburg as the greatest thing since sliced bread.
He compared him to Sidd Finch. Of course Sidd Finch was a fictitious character, so why not compare him to Zeus?
But fine... he's Sidd Finch. He's the greatest pitching prospect in recent memory.
I would warn the Nationals against drafting him.
Yeah, I know the Nationals need a stud ace.
They need a LOT of things.
And if they aren't swimming in dough, then let me warn against spending 50 million tomatoes on this guy.
In my Braves Home Grown vs. Acquired post I told the story of Todd Van Poppel being the best talent in the draft and how the Braves were stuck with Chipper Jones.
In my White Sox post I recounted how neither Frank Thomas nor Robin Ventura were as coveted as Earl Cunningham nor Ty Griffin. Who? Exactly.
Plus the #1 over all pick is not a slam dunk.
Remember how awesome Kris Benson was supposed to be?
Remember Matt Anderson? Me neither.
Remember how Paul Wilson was supposed to be the next great ace?
Remember Brien Taylor's hold out?
Remember Bryan Bullington?
Even some players that did have talent could flame out to injuries like #2 pick Mark Prior.
You can find talent further down in the draft without blowing $50 mil. Tim Lincecum was the 10th overall pick. C.C. Sabathia was the 20th pick.
Randy Johnson was a second round pick. So was Greg Maddux.
If I were in charge of the Nationals, I'd take that $50 million and tell my scouts to sign 50 good players to a $1 million bonus. They need volume in that system.
Besides, Strasberg will opt out the first chance he gets!
Posted by Sully at 8:27 AM