I want to hear from you WBC apologists today 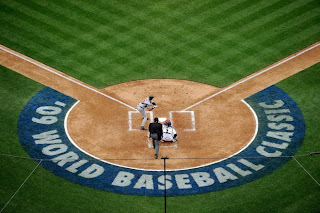 Seriously... how heartbreaking was this game?
Junior... you are one of my loyal readers.
You wrote in my comments section "I would rather see USA win the '09 WBC than the Yankees beat Boston in the ALCS."
So today must be one of the most heart breaking days in your baseball viewing lives.
As a Yankee fan, this must be up there with Edgar Martinez's double in the 1995 Division Series...
This must rank with the pain of the last inning of the 2001 World Series, the mighty collapse of 2004 and the absurdity of the midges in the 2007 playoffs.
This must be one of those mornings like after the Aaron Boone homer when people just knew NOT to e mail me.
I mean does it really rank up there? Are you going to be replaying that Jeter error that broke open the game in your head over and over again?
"Man, we HAD them!"
Or are you thinking "Rats... we could have won that. Oh well, the real season is starting soon"?
Those games I mentioned above... they didn't involve insane pitch counts. They didn't involve teams dictating "This player needs to rest."
They involved starters coming out of the bullpen (Randy Johnson pitched in relief in the finales in 1995, 2001 and 2005!)
Think Schilling's sock would have blood (or cocktail sauce) on it in March?
Think Kirk Gibson would limp to the plate before Easter?
Would Jeter dive face first into the stands for Team USA?
That wasn't even a playoff game... but it was Red Sox/Yankees.
The WBC is a nice idea... but it carries no weight. And no matter how much excitement people try and manufacture for it, it will remain an exhibition at half speed.
At one point when Roy Oswalt was being beaten like a drum last night, one of the ESPN voices said that Oswalt was getting his pitches in that the Astros would have required.
Getting his pitches in? This was an elimination game... supposedly in a World Wide Tournament! (Where Mark DeRosa is the best first baseman in America.)
I guess today is the wrong day for pointing all of this out.
What I am saying is, for my readers like Junior who think I am too harsh on the WBC and that it IS a meaningful title... check Sully Baseball in June.
I'll ask you if you even remember the final game.