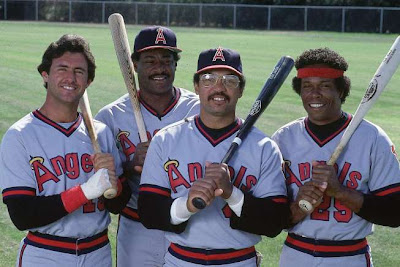 I buy ballgames on iTunes every once in a while and it is a blast to watch whole broadcasts of old games.

I picked out Game 5 of the 1982 ALCS between the California Angels (which should still be their name) and the Milwaukee Brewers (back when they were in the American League.)

I remembered watching those games and taping them to send to my friend P. J. Jurack who was a big Brewers fan living in Europe. Obviously I knew the Brewers won the game, but I couldn't remember how.

Ergo, it is fun to rewatch these games when the details are hazy.

I'll tell you what stuck out to me... the players introductions.

It was in Milwaukee, so when the Angels were introduced, it was either silent or they were booing.
But they were probably wetting their pants. 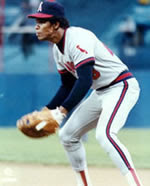 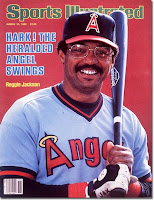 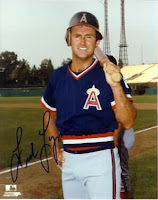 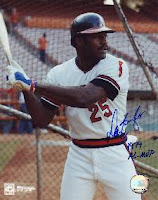 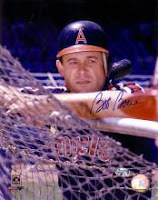 Are you kidding me?
Was this the 1982 California Angels or the 1982 American League All Star Team?

Think about that... numbers 2, 3, 4 and 5 in the line up were all recent American League MVPs.

The lead off hitter, Downing, was an All Star who got some points in the 1982 MVP race.
The #6 hitter, DeCinces, would finished 3rd in that year's MVP vote.
The #7 hitter tied for the Home Run title the year before.
The #9 hitter, Boone got some points in the 1982 MVP race.
Even Foli, the weak link in the line up, was a former #1 pick over all and hit .333 in the 1979 NLCS and World Series for the Pirates.
I sat there, 27 years after the fact, thinking "Wait... this is the LOSING team?"
And then I watched the game unfold... the Brewers looked terribly overmatched.
Gorman Thomas was literally limping.
Pete Vuckovich had control issues.
And I began wondering "Am I watching an alternate universe? Has iTunes opened up a parallel dimension where I can watch ballgames that have different outcomes?"
That would be cool! Maybe I could see the Red Sox win the 1986 World Series!
The game crept along to the 7th inning with the Angels 7 outs from a trip to the World Series and I sat riveted, all the while questioning myself.
"Wait... the 1982 World Series was St. Louis vs. Milwaukee, right? Not St. Louis vs. California" I kept asking myself.
And then I wondered "Am I really Sully? Am I really in South Pasadena, California?"
With two outs in the 7th and the Angels still up and reliever Luis Sanchez laboring after a walk to Robin Yount, Cecil Cooper came up.
The amazing Keith Jackson kept pointing out that the Angels had a full bullpen and lefty Andy Hassler (a member of the 1978 Red Sox) was warm.
OK, I said in the present... they need to bring in Hassler to face Cooper.
This was not a second guess... I thought this AS IT WAS HAPPENING... 27 years later.
Oddly they stayed with the clearly struggling righty Sanchez instead of bringing in the fresh left Hassler.
Cooper singled in Charlie Moore and Jim Gantner for the lead.
THE VERY NEXT BATTER Gene Mauch brought in Hassler... but it was too late.
The Brew Crew took the lead and held onto the 4-3 lead to win the pennant.
And suddenly it became so clear to me.
I was focused on all of those All Stars and MVP candidates in the line up... but it was the first name, Gene Mauch, that mattered most.
I'm sure he was a great regular season manager, but you get the sense that if you gave him the 1927 Yankees, he'd make a bad move with the pitching staff and they'd lose.
If they won that game, the Angels would have KILLED the Cardinals.
And Fred Lynn and Rod Carew would have rings, the Angels would have won in Gene Autry's lifetime and Reggie Jackson's legend would be even bigger if that is possible.
Good job Gene.
Posted by Sully at 11:40 PM