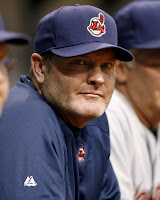 In 2007, the Rockies, Diamondbacks and Indians were all in the League Championship Series.
Each had young hungry teams filled with terrific talent and seemed to be poised to contend for many years to come.
And each had a steady manager at the helm. Clint Hurdle with the Rockies, Bob Melvin with the Diamondbacks and Eric Wedge with the Indians.
So how did it work out?
Well with today's firing of Eric Wedge, all three managers have been fired less than 2 years after their improbable LCS berth.
It's sobering, especially when you think about teams that are trying to build something positive for the long term, knowing that you don't even get 2 years credit for a solid and unexpected finish.
But as I said about the Rays at the end of last year, it's dangerous to try and predict who will have long term success.
Posted by Sully at 5:42 PM