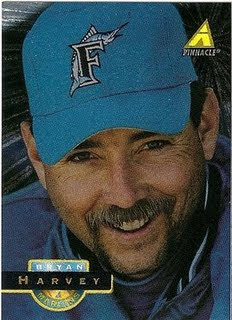 It is fitting that Derek Jeter is probably going to pass Lou Gehrig to become the Yankees All Time hits leader in Yankee Stadium on September 11th.

Jeter means as much to New York as any person in the past decade.
Gehrig was the native New Yorker who brought dignity and class to the Yankees.
And this date will of course always be linked with the city.

It has the potential of being one of the great Yankee moments and as usual, Jeter gets it.

“I’m happy that I was able to do it here at home,” Jeter said. “We had so many special moments across the street. Hopefully this is the first of many memorable moments here at the new stadium.”

He is a true Yankee legend, cementing his place in the team’s lore (as if he needed it.)

So why am I thinking about Bryan Harvey?

You remember Bryan Harvey, don’t you?

Currently he is the pitching coach for the Tulsa Dillers in the Rockies organization and his son is a pitching prospect.

According to Derek Jeter’s interview with Michael Kay on CenterStage, as a minor leaguer he was almost traded to the Florida Marlins for Bryan Harvey.

The trade would have made sense seeing that the Yankees desperately needed a closer and Jeter was a few years away from making the team.

It was one of those trades that used to be made all of the time in Yankee land. A young player is shipped off for a recognizable player… and soon former Yankee farm hands like Doug Drabek, Willie McGee, Greg Gagne, Jose Rijo and Jay Buhner star for other teams while the veterans break down in the Bronx.

Of course injuries ended Harvey’s career after one game in the 1995 season. Jeter was called up later that year where he backed up veteran Tony Fernandez. 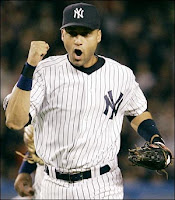 He became bigger than any superstar that George imported.

He became the most loved home grown Yankee since Thurman Munson.

And to think he could have been a Marlin… and inevitably been traded elsewhere when he asked for a bigger contract.

Or he could have been fit in with a smaller team and become like Michael Young… a star player that nobody had heard of.

Perhaps he would never have been a star!
Some people just click in right environment. 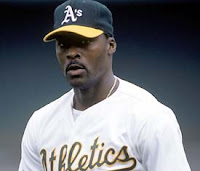 Dave Stewart was a mediocre spot starter and middle reliever bouncing between the Dodgers, Phillies and Rangers. He went to Oakland and became a Cy Young candidate and World Series MVP.

Of course there are critics of Jeter who say he is overrated and start blathering stats… obviously not watching all of the big rallys he contributes to and all the big plays he’s made over the years.

Others say “Well if the Yankees had Nomar or Tejada or Vizquel or A-Rod instead of Jeter, they would have won just as many titles.”

How do they know that?
Don’t they see the number of teams that think they can slap together stars to win instantly… only to see the teams fall on their face. (Go look at the team in Queens if you don’t know what I mean.)

And who knows what makes the perfect combination for a winning team? Those Yankees championship teams won year in and year out during the steroid era without a single player hitting more than 30 homers. They did it without an MVP or a Cy Young winner in the title years. And statistically you could find better players at every position…

Yet somehow they had the right combination to win.

Take Jeter out and replace him with someone else, you may not have the right mix.

It’s like saying “The Godfather” would have been as good if Harvey Keitel played Tom Hagen instead of Robert Duvall. Heck he’s not the main character and Keitel is good! 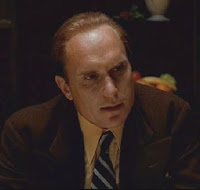 We’ll never know if another shortstop could have done the job as well as Jeter. What we DO know is that it worked in a spectacular manner.

And I also know that Yankee fans would have been denied this night if Bryan Harvey became a Yankee in 1994.