Not only should Lidge not close... he shouldn't be on the playoff roster 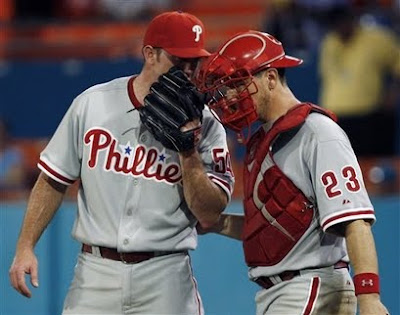 I guess my title kind of says it all... but seriously, there should not be a discussion of whether or not he should be closing.
That ship has sailed.
Even the Devil is starting to feel bad about that deal he struck.
It's kind of gone beyond opinion right now. I can prove he shouldn't be the closer in a court of law in front of a jury of his peers.
Seriously, when I declared the situation to be grotesque, his ERA was 7.15.
That was early September. Since then his ERA has gone UP!
It's sitting at 7.48 in late September.
His ERA hasn't been below 6.75 since early May.
Another bad outing and his ERA will be closer to 8.00 than to 7.00.
Stop and think about what that means.
If he enters a game for one inning, there is a 83% chance he will let up a run in that inning.
Which means if he is up by a run, there is an 83% chance that he'll blow the save.
Yeah I know what he did last year and it was great for the Phillies.
But he physically can't do the job this year.
It would be like having Mickey Rooney do a song and dance routine NOW!
"But he did so many great ones in the past."
Sure, but he can no longer WALK!
The Phillies need to go to plan B... or C... or are we up to H at this point?
No responsible manager would bring in Brad Lidge in a playoff situation right now. It would be insanity.
Lidge's ERA is nearly 0.75 points higher than Eric Gagne's during his horrific Red Sox stint in 2007... and Gagne's time in Boston was so bad it inspired this musical ditty.
Again, spare me the "He's the only one with experience as a closer" argument.
His experience has led to an 0-8 record, 11 blown saves and a sense of dread whenever he removes his warm up jacket that could only be described as Armando Benitez-esque.
Besides, what was Adam Wainwright's closer experience when he had to take over for the injured Jason Isringhausen in 2006?
Or Bobby Jenks' limited experience in 2005 taking over for Dustin Hermanson?
They had a combined career 9 saves going into those post seasons.
Guess what? Both clinched the final out of the World Series.
So how's about this for a solution?... Charlie Manuel goes into the post season without Brad Lidge on the roster.
Seriously. In what other situation would you put a pitcher with an ERA of 7.48 into a playoff spot?
The Phillies can carry 11 pitchers.
STARTING ROTATION
1. Cole Hamels
2. Cliff Lee
3. Joe Blanton
4. J. A. Happ
BULLPEN
5. Ryan Madson
6. Pedro Martinez
7. Clay Condrey
8. Kyle Kendrick
9. Tyler Walker
10. Jamie Moyer
11. Sergio Escalona
And no need to have Lidge in there.
Granted that bullpen doesn't strike fear into anyone's hearts. But how could that be worse than having a bullpen closer who is a lock to blow a save.
Maybe Manuel can mix and match the 9th. Imagine Pedro coming out one inning... or Condrey another based on the match ups.
Or cross your fingers like Guillen did with Jenks and LaRussa did with Wainwright and hand the ball to the likes of a Madson.
Do you really think Madson would pitch to a 7.48 ERA?
But the Phillies can't bring Lidge along. Oh he can dress and travel with the team, but he can't be activated.
Do you really want Lidge facing the best hitters in the NL in playoff games?
Does any Phillies fan want to see Lidge face Pujols?
How did THAT turn out?