Did I speak too soon about that whole NL Cy Young Award? 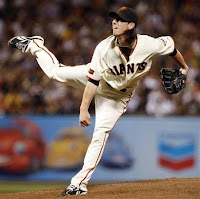 10 days ago I declared the NL Cy Young Award race over.

Tim Lincecum locked it up and put it into his back pocket.

Well a reader named Dano basically said "NOT SO FAST!" and pointed out another former NL Cy Young Award Winner who might be picking Tim Lincecum's pocket for the Cy.

Chris Carpenter threw a 1 hit complete game shutout yesterday against the Brewers and has made this September very interesting for who should add a second Cy Young Award to their mantle.
In Carpenter's defense...
Carpenter has won 3 more games than Lincecum in 4 fewer starts.
His ERA lower than Lincecum.
Carpenter has a lower WHIP.
Carptenter has the best strikeout to walk ratio.
Carpenter is the ace of a team that is surprising many by running away with the Division.
In Lincecum's defense...
If Lincecum had Pujols, Holliday and Yadier Molina in his line up, he'd have those 3 more wins. Keep in mind two of his recent losses include a 7 inning, 2 run, 11 strikeout performance against Philadelphia and a 7 inning 3 run 7 strikeout performance in Colorado.
Not to mention no decisions like an 8 2/3 inning, 2 run, 4 hit performance against the Dodgers and a 7 inning, 1 run, 10 strikeout performance against Pittsburgh.
He's had some bad bad luck.
For people who value innings, there is no comparison. Lincecum is the only NL pitcher with 200+ innings while Carpenter has yet to reach the 170 inning level.
He also has nearly 100 more strikeouts than Carpenter.
In the categories that Carpenter leads, Lincecum finishes second in ERA, WHIP and K/BB ratio.
It's a tough call... and in the end the Cardinals easy run to the division title will probably work against Carpenter. If the Giants make the playoffs on the strength of Lincecum's pitching, that will probably be the deciding factor.
But if Carpenter shoots past the shiny 20 win number and leads the league in ERA... he might win it based on traditional numbers.
Either way, like Florida in 2000... this was called too soon.
Posted by Sully at 8:07 PM