Red Sox fans... do yourself a favor and don't follow the Yankees for the rest of the year 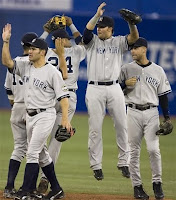 I still do it.
I check the Yankees score, hoping they will lose... which I don't think they have since the 14-1 loss in Fenway.
But it doesn't matter. They've won the division. Their winning and losing in the regular season is meaningless to the Red Sox and us fans.
So stop glancing over to the score.
Stop wondering if the Sox are going to gain ground.
Stop hoping that A. J. Burnett will become the new controversy in the clubhouse.
They are on a roll and it is irrelevant for the Red Sox. Pay attention to Texas, the Angels and the Rays. Get into the dance.
Only the games on September 25-27 when they play the Red Sox are relevant. Don't waste the energy otherwise.
Just hope that some team knocks them out of the Division Series. THEN you can have an interest again!