Some thoughts on the Jorge Po-Saga 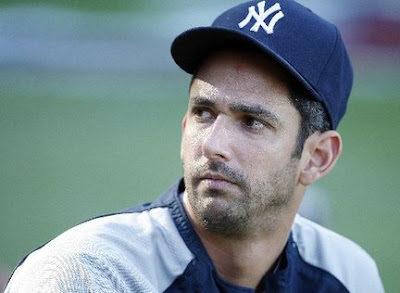 Let the record show that I gave Posada the benefit of the doubt last night. I offered the possibility that he asked out of the lineup to be a good teammate.

Now it looks like that possibility is as dead as Posada’s credibility. He is quitting on the team, just as much as Manny Ramirez quit on the Red Sox. (Except Manny could still hit.)

Here are some of my initial thoughts 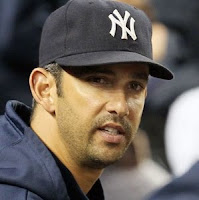 This can all go away this morning if Posada apologizes to Cashman, Girardi and the team and has a press conference where he says “I got upset. I did the wrong thing. I’m sorry. I’ll do what it takes to win games. All I want is to win another ring and honor the Yankee tradition.”

Think that will happen?

I like to think that the Tweet Jorge’s wife sent out about his injured back was NOT Jorge's idea.

I kind of like the thought of Jorge finding out about it and calling his wife and saying “Um honey. Please tell me you didn’t send a Tweet out saying that I am out because of a bad back.”

And of course she would reply “Yeah I did. I figured that it would end any controversy. Did it work?” 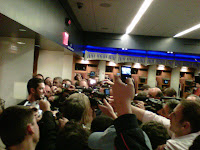 It seemed like he didn't have his script prepared.

She compared it to John Belushi’s string of excuses to Carrie Fisher in The Blues Brothers. 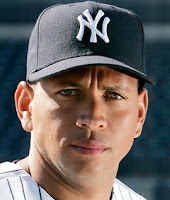 Can you imagine if A-Rod did this?

If A-Rod had thrown a hissy fit after being dropped to 8th in the 2006 playoffs?

Or didn’t want to be embarrassed on national TV?

Can you imagine anyone who wasn’t a home grown Yankee Core hero pulling this crap?

They’d be cut before you could say Ed Whitson.

How much is Andy Pettitte currently happy with his decision to retire?

He gets to retire with dignity and everyone saying what a great Yankee he was and so happy for him blah blah blah.

Nobody talked about the Yankees not bringing him back for 2004 and his three years in Houston or the fact that he took PEDs. Everyone was holding hands and skipping through the tulip fields wearing pinstripes.

Pettitte’s exit might be the exception rather than the rule for the exit of these Yankee legends. Remember how Bernie Williams career ended with the Yankees not bringing him back? Was he retired? Wasn’t he?

This all seems like prologue to what will be undoubtedly the ugliest “Yankee Legend who has lost it” saga… After Derek Jeter gets 3,000 hits and his range and batting average slips, what do you do? He signed a 3 year deal. What kind of player do you think he will be in 2 seasons?

The days of players in their late 30s suddenly becoming elite again are over.

And Derek’s pouty “They didn’t offer me a huge contract right away. That’s not fair!” press conference shows he might be a smidge more sensitive than his public persona lets on.

How happy is Cliff Lee that he passed on the Yankees?

Instead of stepping into the walking on egg shells changing of the guard, he gets to be part of an outstanding rotation on the best team in baseball.

And oh yeah, he gets to make more money than his grandchildren can spend!

The Yankees are still only 1 game out of the loss column for first place with 75% of the season to go. It’s not like they are the Mets or the Dodgers in terms of big budget disasters.

But keep in mind that the Yankee lineup is, amazingly, not that impressive. Besides Granderson, who is really tearing it up? Not Teixeira. Not A-Rod. Not Swisher. Not even Cano.

And the rotation is being held up by the likes of Barolo Colon and Freddy Garcia. For the first quarter that has seemed to work. Can they do it for three times as long as they already have? 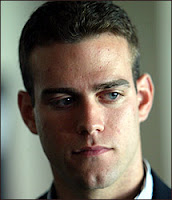 Say what you want about Theo Epstein, and he has made some bad moves, but he does a good job of avoiding these situations.

He’d have a beloved player walk instead of signing them to a sentimental contract.

We didn't have to sit through a long Pedro Martinez or Nomar Garciaparra or Johnny Damon breaking down saga.

It may be heartless, but it makes the season less awkward.

The Posada contract proves a theory that I wrote about. For all the talk of the Red Sox being the cuddly olde towne team and the Yankees being the steely soulless franchise… it is the YANKEES who are more sentimental.

Signing Posada to a four year deal late in his career was insane. And the reasons why are now obvious. They are paying top dollar for a catcher who can neither catch nor hit.

Speaking of legendary World Champion catchers batting 9th, notice that The Lobster, Jason Varitek was at the bottom of the order?

Did he bitch and moan?
Nope.

He batted 9th and look what he did. He got an RBI single, called a shutout and according to the Providence Journal, poked fun at his own lack of production.

And lest we forget that the 2009 Red Sox in the middle of a pennant race traded for Victor Martinez to take over as catcher. Varitek, the team’s captain, had every right to be angry and maybe even ask to be traded himself. His response?

"We have a chance to win ballgames. You can bitch, you can moan, or you can provide what you can to aid a team in winning -- and we want to win here.”

According to CBS Sports, a former Big League manager (whose name probably rhymes with Broe Brorre) said the following doozy.

"To Posada, who has had a great career, it's a personal slap in the face to hit ninth," said one former big-league manager. "Hit [Brett] Gardner ninth. Girardi has to understand that Posada's got more friends on that team than [Girardi] does."

Is this a baseball team or an episode of Survivor where alliances are formed? Why should Brett Gardner hit lower than Posada? Gardner is batting 90 points higher with superior OPS, OPS+, power and speed.

Posada only leads him in friends. Guess what? Get your average UP to .170 and maybe Posada should be moved up.

The Yankees could go one of three directions:

1. They could implode because the team is fractured
2. The team could rally and Posada can get into line and this becomes the moment where the team focused.
3. The team realize that cutting Posada is the only option and Jesus Montero arrives on the team opening up a new era of Yankee baseball.

I think #3 is the least likely.

This is the great test for Joe Girardi. He is probably looked at by the veterans as a former teammate and not the manager. He HAS to stand up to Posada and show that he is the boss in the clubhouse.

If he can’t solve this problem (and show that he is not equipped to deal with the inevitable looming disasters of Jeter, A-Rod and Rivera eventual declines) then he might be gone. Remember, Tony LaRussa will be a free agent next off season!

It is moments like this that makes me think that Brian Cashman wouldn’t mind being a GM elsewhere. Most other teams wouldn’t have signed Posada to a multiyear deal at his age.

And let’s face it, the only reasons why he got that deal were they didn’t want to disrespect Posada after the A-Rod contract negotiation in 2007 and because the Mets were interested.

Most other teams would have let him walk and have a younger player in his place.

In the end, keep in mind one more thing… neither the Red Sox nor Yankees are in first place. The team that won 2 of the last 3 division titles is in first place… the Tampa Bay Rays. I am sure they are loving the strife going on in the greatest rivalry in sports.

The Red Sox and Yankees game is the national ESPN game tonight.
I am sure this won't get any attention.