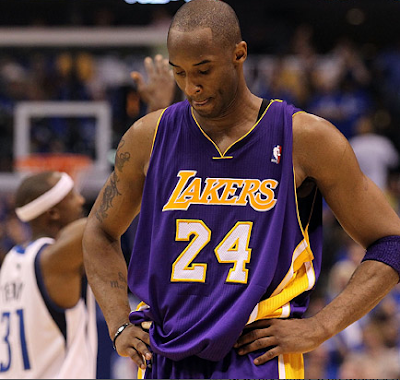 There are so many wonderful things about this Lakers collapse, I can't pick what is the best part.

- The Lakers are a loss away from a monumental face plant and doing it because the team is imploding from within.

- The Lakers are a loss away from having Phil Jackson's career end with a whimper. Red Auerbach's coaching career ended with the 1966 NBA Title. See the difference?

- The Lakers are a loss away from forever ending any talk of Kobe Bryant being on the same level as Michael Jordan. Kobe is a great player. A Hall of Famer. But would Jordan be swept out of the playoffs like this?

- The Lakers are a loss on Sunday away from making last Wednesday's 93-81 fiasco their last home game of the year. That would mean the last game Phil Jackson coached at home, the Lakers got booed by the remaining fans in Staples at the end of the game.

- The Lakers call in show on 710 ESPN are filled with fans complaining about refs calls and intense denial. Schadenfreude is fun.

- Because the Lakers are down 0-3 in the series, there is talk about how no NBA team has ever come back from that. But guess what other team they brought up? What other team came back from an 0-3 hole? I'll give you a hint... they don't bring up the 2010 Philadelphia Flyers.

That's right. My 2004 Red Sox! So I get to hear about Laker misery and how they probably won't match Red Sox heroics.

It doesn't get any better than that!