It's the flea market series 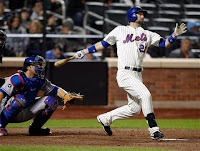 The Mets and Dodgers are playing in the ballpark that is a shrine to the history and legacy of the Dodgers: CitiField.

The two teams from the two biggest markets are squaring off. And at this point they are both sub .500 teams with outrageous financial issues.

Let me put it this way:
The Mets could lose up to $100 million over the last two seasons and are involved in one of the great financial scandals of our age... and they are the STABLE one of the two teams.

As Frank McCourt is gearing up for a spectacular flame out, the Dodgers might not even reach payroll for June.

So when you have two expensive bad teams, what can you expect to happen later in the year?

So take a look at the talent on display. If you want someone, make an offer.
One team could use a lower payroll every 2 weeks and the other team has already thrown good money after bad in the Oliver Perez/Luis Castillo fiasco.

Make your bids. These teams will look a LOT different on August 1 after the trade deadline!