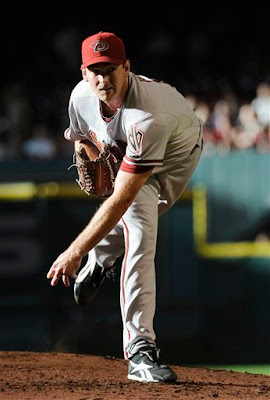 The Diamondbacks are somehow creeping up the NL West standings. In fact if the D’Backs win tomorrow and the Giants lost they will be in first place going into Memorial Day. And today they crept a little bit closer with the help of Zach Duke.

That’s right. Duke made his Arizona debut by throwing 7 innings of 3 hit shut out ball against Houston. So with Ian Kennedy and Daniel Hudson and someone named Joshua Collmenter, Duke could make for a nice rotation in the desert and manager Kirk Gibson.

And oh yeah... he hit a freaking home run too!

Remember Zach Duke? It wasn’t that long ago that he was an All Star for the Pirates. A young left handed starter. A good trade chip. And they hung on to him for too long.

And then he fell apart and dumped him to Arizona.

Much like how they dumped Matt Capps to Washington. The Nationals flipped Capps for young catcher Wilson Ramos while the Pirates didn’t even get a draft pick.

The Pirates didn’t walk away empty handed. They got a warm body named Cesar Valdez who is pitching decently in AAA as a 26 year old reliever.

The Diamondbacks are surprising in a pennant race with a potential left handed starter who was on the 2009 All Star Game and the Pirates have a minor league middle reliever.

I brought this up last winter.
I will bring it up again.
The Pirates inability to put even a .500 product on the field has less to do with payroll and more to do with jaw droppingly awful personnel decisions.

Watch Zach Duke make the All Star team this year… his second in three tries.