The big rivalry for the weekend... it isn't in the Bronx 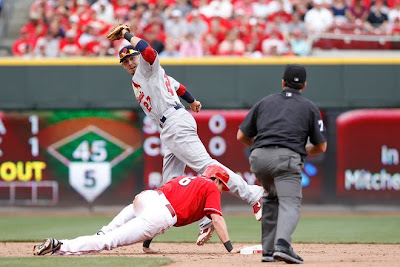 Last year, I wrote about how the Cardinals and the Reds could become a dynamic new rivalry for the new decade.
And after the first two games of this series, I am not backing down from those words. The Reds win on a walk off extra innings hit by Joey Votto last night and today the two battled back and forth until Cincy pulled ahead.
The Reds have leap frogged over the Cardinals and probably put a little more bad blood between the two. I am as excited about Red Sox and Yankees as anyone, but first place isn't on the line in that series.
Put a little fire under this rivalry baseball. Besides, as I wrote for the Hardball Times, the Reds have the opportunity to be another national team.
I for one am excited about tomorrows game.
It's a good rivalry between traditional baseball powers.
Why am I the only one noticing this?