Is Jorge Posada classy or a diva? 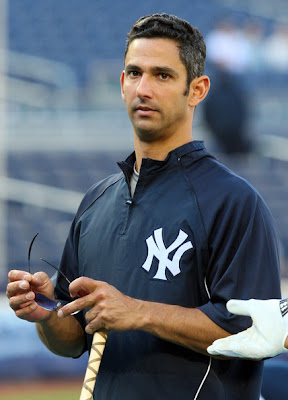 Joe Girardi put slumping Jorge Posada in the 9th spot in the lineup for today's Red Sox - Yankees game.
This isn't a situation like Jason Varitek's miserable start. The Sox captain is batting ninth with his rotten numbers because the pitching staff just doesn't like throwing to Jarrod Saltalamacchia.
Posada is no longer a catcher. He is a DH. His ONLY job is to hit. And roughly 25% of the way he is doing anything BUT that.
He has no batting average, his on base percentage sucks, he has 8 extra base hits total and is slower than dial up service.
Where is a bat like that supposed to hit?
Cleanup?
Girardi put him 9th because there is no 10th spot.
And he asked out of the game.
Now there are two different scenarios for what happened. And they are at the polar opposites of the "Respect Meter."
FIRST SCENARIO...
Posada shows what a great teammate he is
He realizes that his bat has become a liability and tells his former teammate and current manager Girardi "Look, this is a Red Sox and Yankees game. We need to win this game. Put someone else in the lineup. And let's go get them!"
The rest of the team see what a great Yankee he is and this is used in the last act of the Yankeeography.
SECOND SCENARIO...
Posada shows was a Diva he is...
If Posada is insulted by batting 9th and if he asked to be taken out, then he is a bigger diva than Aretha Frankin ever was.
Do you know why?
Because when you are batting .165 with 38 total bases in 32 games, you are lucky that you aren't designated for assignment.
Seriously, shouldn't he be kissing Girardi's buttocks for keeping him in the lineup? Is Joe supposed to have him higher in the line up for old time's sake?
That didn't work for Tessio, why would that work for Posada?
There are already rumors going around the internet that there was some sort of hissy fit. Could you imagine if A-Rod had made a hissy fit when Joe Torre dropped him to 8th in the 2006 Division Series? And that was a year removed from an MVP season for Rodriguez.
Posada is a 39 year old former catcher who can't hit. Yes, he has given the Yankees 14+ seasons of All Star championship caliber play. But he stinks now.
The Yankees stars seem to want to be rewarded for their past excellence. This is reminding me of Derek Jeter's shockingly petty press conference where he complained that he had to actually go and become a free agent.
Wahhhhh! I should just be automatically given a huge contract.
Now if Posada is saying "Wahhhhhh I want to bat higher in the lineup because I got that hit off of Pedro in 2003" then the super classy Yankees for life are showing a very unclassy side.
For now, I will give Posada the benefit of the doubt.
If the rumors are true... then we are in Diva land!