What will it take to get Bob Geren fired? 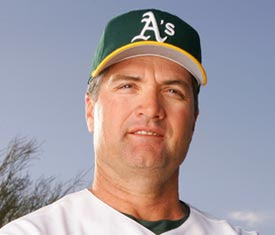 Bob Geren still is the A's manager. Isn't that incredible?

The A's are playing in a winnable division.
You don't believe me? The MARINERS are competing and I think I could crack their 25 man roster.

And the A's are the only team with a losing record. Yeah I know this team has had some injuries. Do you know what OTHER team has had injuries?

EVERY TEAM IN BASEBALL!!!!

Oakland was the trendy pick for the AL West (I had the Angels) and the team just looks dead from the neck up. Having Bartolo Colon throw a complete game shutout against you is a low point. I don't care how his DNA has been scrambled and how many Gamma Rays he has absorbed.

And they got blown out again tonight by the Yankees. (Thanks for the help!)

The A's always look a little bit off. And I know that Billy Beane thinks managers are disposable... but should he DISPOSE of this one?

I mean isn't there someone who might be able to squeeze a little bit out of this club. ESPECIALLY when it looks like 87 wins might be enough to win the West?

Geren isn't new to the job.
This is Geren's 5TH SEASON!

He's lasted longer than a Presidential term.
Think about it. We gave Jimmy Carter and George H. W. Bush 4 years and then kicked them off to the curb, and they were running the COUNTRY!

Geren has the A's and the greatest peak he has climbed in 4 1/3 seasons was a .500 season. This was after the A's went to the post season 5 out of 7 seasons!

I've seen no reason for him to stick around.

Has he REALLY merited more time than the President of the United States?