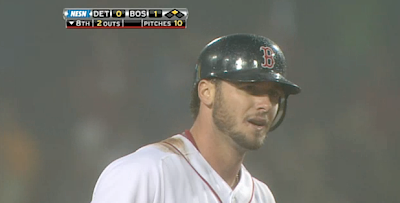 In so many ways these are my favorite kind of wins.

A well pitched game by Clay Buchholz continues to give me faith in the Red Sox pitching staff, especially after he wiggled out of several jams.

And in the 8th inning after a delay with 2 outs and nobody on, I was conceding the 8th inning. I thought "Come on Crawford, just get on base so we know the top of the order is coming up in the 9th."

And when he walked I thought "OK, we're probably not going to score here. But if the Sox could keep the Tigers off of the board then we know Ellsbury, Pedroia and Gonzalez will be coming up in the 9th!

I mean SURELY Saltalamacchia isn't going to do anything with 2 outs and a runner on first.

Bam! Off the wet wall and in comes Crawford.

Then comes the 9th. Old friend Victor Martinez doubles off of Papelbon and the pinch runner goes to third with 1 out.

I started thinking "OK, the Tigers are probably going to tie the game here... but Gonalez and Youk and Papi are coming up in the 9th. We can still win on a walk off."

Then Avila and Raburn strike out.
Game over.

I was already optimistic but it turned out to be a more direct route to happiness.

5 in a row.
A win tomorrow and the 6 game losing streak has been matched in the other direction.
Let's update the tally.

DODGED BULLET GAMES - 12
April 8 - 9-6 win against the Yankees. (The Sox end their 6 game losing streak with a slugfest. John Lackey stinks but Phil Hughes stinks even more.)
April 10 - 4-0 win against the Yankees. (Beckett and Sabathia duel in a game that was 1-0 until the late innings.)
April 20 - 5-3 win in Oakland. (Red Sox survive a lead off homer and two bases loaded situations and facing the tying run at the plate to win their first road game.)
April 21 - 4-2 win in Anaheim. (The Red Sox stranded 15 men on base and Josh Beckett's went 8 strong with no decision. But the Sox rallied in the 11th to win.)
April 22 - 4-3 win in Anaheim. (Peter Bourjos makes a 2 run errors and the Red Sox survive a bizarre passed ball by Jarrod Saltalamacchia that let a run scored from second.)
May 1 - 3-2 win against the Mariners. (Ichiro loses a ball in the sun that turns into a 9th inning triple for Lowrie. Crawford singles him home for the win.)
May 8 - 9-5 win against the Twins. (Dice-K lets up 3 runs in the first but settles down as the Red Sox clobber Carl Pavano.)
May 9 - 2-1 win against the Twins. (A bullpen breakdown cost Beckett the decision but Cark Crawford ended the game with an 11th inning walk off hit.)
May 13 - 5-4 win in the Bronx. (Youkilis homers off of Joba and Bard and Papelbon make it more interesting than it needed to be.)
May 15 - 7-5 win in the Bronx. (Sox fall behind 4-1 but come back as Youk, Papi and Salty all homer.)
May 16 - 8-7 win against the Orioles. (Down 6-0 after 6 innings, the Sox rally and win it with a 2 run walk off double by Adrian Gonzalez)
May 18 - 1-0 win against Detroit. (With 2 outs in the 8th, Salty doubles home Crawford from first for the only run. Papelbon gets himself in and out of 9th inning trouble.)

TEETH GRINDER GAMES - 12
April 1 - 9-5 loss in Texas. (The Sox tie Opening Day in the 8th with an Ortiz homer only to have Bard implode and the Sox let up 4 in the bottom of the 8th.)
April 5 - 3-1 loss in Cleveland. (The Sox drop their 4th straight as the bats are dead in Cleveland.)
April 7 - 1-0 loss in Cleveland. (Sox blow a great Lester performance on a squeeze bunt and Darnell McDonald overrunning the bag to end the game.)
April 12 - 3-2 loss to Tampa Bay. (A solid Lester performance is wasted as Kyle Farnsworth of all people shuts down the Sox.)
April 15 - 7-6 loss to Toronto. (Bobby Jenks implodes with a 4 run seventh inning as the Red Sox waste Pedroia and Youkilis homers and a clutch RBI double by Scuatro.
April 19 - 5-0 loss in Oakland. (Pedroia gets picked off, the Sox bats go dead and waste a solid Lackey start.)
April 26 - 4-1 loss in Baltimore. (Buchholz pitches tentatively and the Sox let Kevin Gregg of all people to close out the 9th.)
April 27 - 5-4 loss in Baltimore. (The Sox tie the game with a 3 run 8th only to have Bard lose it in the bottom of the 8th.)
April 29 - 5-4 loss to Mariners. (Bobby Jenks blows a 7th inning lead, wasting 2 Mike Cameron homers.)
April 30 - 2-0 loss to Mariners. (The Sox strand 11 runners and let Milton Bradley double home the go ahead run.)
May 4 - 5-3 loss to Angels. (7 hours with rain delays and stranded runners. Marco Scutaro was thrown out at the plate in the 12th)
May 10 - 7-6 loss in Toronto. (8th and 9th inning heroics, including a homer by Adrian Gonzalez, are undone by a walk off sacrifice fly by David Cooper.)

And guess what?
They are only 2 games out of first place in the loss column.