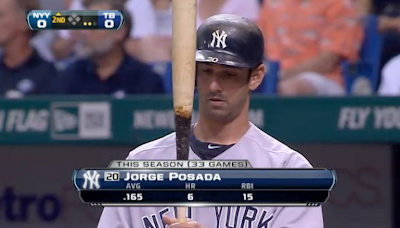 Jorge Posada is batting 7th.
He is batting ahead of Brett Gardner, who has a .341 average and .818 OPS in May is being dropped in the order in favor of someone who is batting sub .170, has 2 extra basehits in the month and who whined his way out of the lineup in a nationally televised game.

This isn't over, folks. Girardi and Cashman's authority is being undermined and there are clearly two camps being set up... are you in favor of trying to win NOW or do you think we should continue to honor the past?

Right now it is clear that you can NOT dishonor the aging superstars, even if it means putting an inferior lineup on the field.

This is going to get interesting, folks.