Is Craig Hansen going to be a reliable reliever? 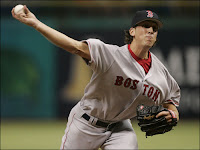 Obviously the story today was Youk being the hero in his Cincy home coming.

And also Wakefield pitching his 4th consecutive solid start.
And Okajima continuing his slide... and Papelbon's rare blown save... and Crisp proving the best move the Sox made in the offseason was NOT trading him... and the fact that J. D. Drew is under the impression that this is a contract year.

But I want to talk about Craig Hansen.
Remember him? The Long Island kid drafted out of St. John's in 2005 and played on the big club that year.

The guy who was supposed to be the next Keith Foulke before that title went to Papelbon?

The guy who didn't play a game on the big league team and looked to be the lone bust of the great 2005 draft for the Sox, which included Ellsbury, Buchholz and Jed Lowrie.

Well he is back on the club now and while his first bunch of outings looked dreadful (9 appearances in he had a 7.20 ERA) he is pitching better.

And today he got the save that Papelbon couldn't nail down.
Granted, it was a shaky inning with a hit and a walk before getting Brandon Phillips to fly out deep with what could have been a game winning homer... but it was a save nonetheless.

And 7 of his last 8 appearances have been scoreless.

Is he putting it together?
Did the former college stud need 2 1/2 seasons on the farm to harness his stuff?

If the answer is yes, then a couple of wonderful things could happen.
First of all this could relieve some pressure off of Okajima, who might very well be a one year wonder.

Secondly it would address the issue of bullpen depth without making a deal. We don't want another Eric Gagne deal, do we?

And thirdly it could really make the Red Sox foundation of a bunch of home grown pitchers even stronger.

OK, we are looking at our #1 and #2 starters as being Beckett and Dice-K... not exactly products of the farm.

But asking Lester, Buchholz and Masterson to be a solid 3-4 and 5 in the rotation is pretty impressive. As is Papelbon closing and Del Carmen and possibly Hansen giving the bullpen depth.

And with Daniel Bard and Mike Bowden still in the system, there could be more home grown pitching on this staff than I remember in all of the 1990s.