Credit is due to the Yankees 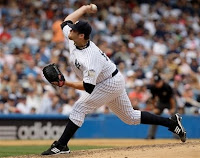 This Tuesday I thought the Yankees were in a strange situation.

Wang was out, their starting staff in disarray and it was Joe Girardi's first real test to see if he could do what Torre always did which is stay calm and win.

Well, while we here at Sully Baseball have always been quick to laugh at the Yankee's expense... I will man up and tip my cap to them.

After falling to .500 on June 11th in Oakland, the Yankees have won 7 in a row.
They made up a week of games pulling themselves up from the definition of mediocrity to back in the thick of the playoff hunt.

Any talk of them being sellers instead of buyers has been cut off.

But most surprising of all is the 7 game win streak hasn't been a 2005 Yankee special. That year they had pretty lousy pitching and middle relief, but they would bludgeon the other team's starter and middle relief and just made sure they dragged an 8-7 lead to the 9th when Rivera would shut the game down.

This winning streak has included a pair of 2-1 games and a 4-1 game. In 5 of the 7 games, the Yankees pitching staff held the opposition to 1 or fewer runs.

Now you can say "Yeah but it was the f-ing Padres, big deal." 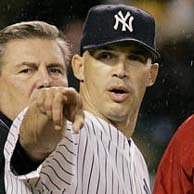 But one thing the Torre teams did when they needed to make up ground was beat the teams you are supposed to beat.

When a playoff spot is missed by a few games, I'm sure the manager thinks of those games lost to a lousy team.

Do you think Willie Randolph is thinking about going 1-6 against Washington, St. Louis and Florida at the end of last season? If he went 3-4, the Mets win the Division. If he went 2-5, they force a playoff.

Now in terms of making up ground, it didn't help the Yankees that the Red Sox have won ever series in June.

Also the Rays haven't cooperated after sweeping the Cubs.
And with Baltimore playing better, the Yankees are one losing streak away from 4th place.

But I come here to praise the Yankees, not to bury them.
The lowly Reds and Pirates will be the next Yankee opponents and then the dazed and confused Mets.