Do you Diamondback fans have ANY IDEA how good you have it? 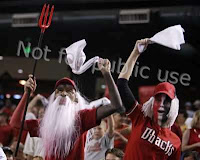 Phoenix should be a baseball mad city.

Phoenix should be a place where when people bring up sports they say "Oh man... they LOVE their Diamondbacks."

I'll say it... Arizona Diamondback fans should be among the most passionate and loyal in all of baseball.

And they are not.
Oh I am sure there are some crazy D'Backs fans out there, but they should be playing to sold out houses every night... not be ranked 13th out of 16 in National League attendance.

Let me list why they should be the toast of the desert and then I will demand answers.

2) THE TEAM HAS A FRANCHISE DEFINING MOMENT 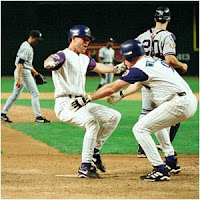 The 2001 World Series was not just the best World Series since the playoffs expanded to 3 rounds but it was the great post September 11th moment of celebration.

And the 9th inning comeback off of Rivera in game 7 was the most stunning baseball moment I had seen since Kirk Gibson's home run off Eckersley.

And considering Rivera's track record in big games and the fact it was a 7th and deciding game, one could argue the 2 runs off of Rivera was even bigger than Gibson's homer.

The Rangers have been around since 1972.
What is THEIR franchise defining moment? The ball bouncing off of Canseco's head?

3) THREE TRIPS TO THE PLAYOFFS IN THEIR FIRST FIVE YEARS

Keep in mind their partners in expansion, the team formerly known as the Devil Rays, spent their first 10 seasons trying in vain to win 71 games.


4) THE REBUILDING WAS QUICK

After posting winning seasons in 5 of their first 6 years, the D'Backs fell apart in 2004, losing 111 games.

By 2007, Arizona was a 90 win playoff team again. 3 year rebuilding process.
The Pirates haven't rebuilt in more than 5 times that many seasons since Francisco Cabrera.

5) THEY ARE THE ONLY TEAM TO WIN IN THE DESERT

The Suns have never won a final.
Wayne Gretzsky isn't enough to make the Coyotes a Cup contender.
And if you want to see the total highlights of the Arizona Cardinals, just rent Jerry Maguire.

Seriously, what other great thing have the Cardinals won?

But the Diamondbacks won it all.

6) THE BOB, OR WHATEVER THEY CALL THEIR PARK IS COOL ON A HOT SUMMER DAY

I know it's hot. It's the f---ing desert. It's tends to be hot.
But it's cool under the roof. Hell they put in a pool for you people!


And despite all of that, the Diamondbacks can't draw.
Hell there were empty seats at the NLCS last year, which is inexcusable.

Why aren't they the biggest thing in Arizona?
They look like they are poised to win ANOTHER NL West Crown, which would be their 5th in 11 years, and yet good seats are still available.

Hey Paul Wren at D'Back Fans... was it too much too soon?

Let me ask you Snake Pit, is it just a lack of interest in baseball?

Or is it because they keep changing their uniforms, D'Backs Talk.

I need some answers D Backs fans.
Phoenix should be a baseball oasis in the desert.

Or maybe you guys are watching the Arizona Cardinals scenes in Jerry Maguire.