It's June, so spring training is almost over for Joba 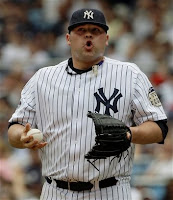 Some people are praising Joba Chamberlain's latest outing where he ALMOST pitched enough to meet the minimum requirement for earning a win.

They even left Andy Pettite out there on Saturday to absorb 10 runs because they couldn't waste a bullpen with the Non Starter/Non Reliever going the next day.

And why not favor Joba over Pettite? What did Pettite ever do for the Yankees?

Now if Joba becomes the next Nolan Ryan, then this will all be worth it.
But turning the entire season into the "Let's not hurt Joba show" still strikes me as kinda sorta bizarre.

Meanwhile the defending World Champs' young pitchers continue to do things like "win" and "throw innings."

Justin Masterson is going the make the decision of what to do with Schilling and Buchholz very difficult.

He's 3-0, pitched 6 innings in every start (if Joba threw 6 innings he'd get a parade down the canyon of heroes.) 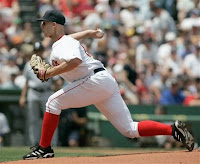