The most significant Thanksgiving in Massachusetts history 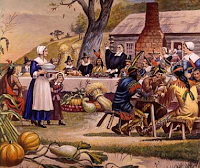 ... had NOTHING to do with Massasoit, Miles Standish, Squanto, William Bradford or anyone else associated with Plymouth Rock.

Yeah, I know the first Thanksgiving was in Massachusetts. I grew up in Massachusetts. We went to Plimouth Plantation on school field trips and interacted with those creepy reenactors who kept pretending it was 1621 and didn't know what Donkey Kong was.

What was the significance of that first Thanksgiving?
Well, it was the last positive memory the native Americans had of white people... it marks the beginning of the Christmas shopping season and is a boom time for the power Turkey farm lobby.

Well, FAR more important for people in Massachusetts was the one 382 years later...
When in 2003 Theo Epstein went to Arizona to eat Shonda Schilling's lousy mashed potatoes, pretended to like them while convincing Curt Schilling to waive his no trade clause and come to the Red Sox.

Theo Epstein, the Doogie Howser of GMs, had dreams of building a Red Sox team through the farm like Oakland... and then use the team's great resources to keep the team together.

But he had a problem... the insanity of the Red Sox fanbase.

They had yet another curse moment with Grady Little forgetting he could actually make a pitching change and Aaron Boone gaining a new nickname that starts with F and rhymes with trucking.

They needed to win a World Series and fast, or else the town and the team would go insane. And after 2003, he decided to push the chips into the middle of the table. That meant getting an ace pitcher and a bullpen closer.

The best potential ace was of course Schilling.
The win loss total wasn't there in '03 and he missed 10 starts due to injury. But his ERA was low, his strikeouts were high and he was a big game pitcher.

He complimented Randy Johnson as the second ace in Arizona and seemed poised to do the same for Pedro Martinez in Boston.

Problem was he wanted to go back to Philadelphia.
Or worse yet to the Yankees.

(Keep in mind that off season Curt Schilling was almost a Yankee and Alex Rodriguez was almost a Red Sox... that's almost surreal now.)

So Theo sat at that Thanksgiving table, grinning while chewing the undercooked turnips and somehow someway convinced Schilling that Boston was the place for him.

23 regular season wins and 2 bloody socks later, the Red Sox were champs, parents graves were visited, your pal Sully got another HBO Spot.

And Theo began the building of a new Sox champion.

And if Schilling's surgery was indeed career ending and his last game was indeed Game 2 of the World Series, it would be truly rotten of me to not salute Curt for the 6-1 post season record for Boston and cementing his legacy as a big game pitcher (as if winning post season MVPs in both Philadelphia and Arizona hadn't done that already.)

Yeah he was a blowhard... but one who backed it up.

So yeah, Thanksgiving 2003 was the biggest in Massachusetts history.
Don't give me Miles Standish.

How many rings did he win?
Let's see HIM win with a bloody sock