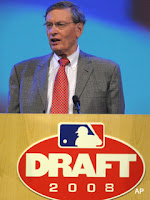 Once again baseball goes through the strange ritual of televising and analyzing the amateur draft.

Look, I am thrilled for the high school and college kids who were drafted and what a great day this must be for them.

But seriously the analysis is the definition of meaningless.
"Here's a kid... good player... he won't see a major league game for at least 3
years and these days who knows what a team will look like in three seasons."

What they should do is cover PAST drafts.
Heck 10 years ago the first round produced 1 Cy Young winner (C. C. Sabathia) and zero MVPs.

"Sure bet? Like Matt Anderson... the first overall pick of the 1997 draft who had 7 unremarkable seasons... or like the 1999 draft when 16 of the first 30 picks (more than HALF) never played a GAME in the majors.... or the next year when 8 of the first 14 picks never made the big leagues... and three of the ones that did never played a full season in the show."

It's a lottery.
Brien Taylor could bust up his pitching hand killing the first over all pick Mike Piazza could prove that he was more than a favor to Tommy Lasorda and give the Dodgers a Hall of Famer with the 1,390th pick.

Come to think of it, scouts should be asking Tommy if he has any more God Children