He spent 2007 in the Gulf Coast low A league and now plays for the Greenville Drive.
He's hitting only .236 with 1 homer, but scouts love his swing.

So why is he my new favorite prospect?
His name is David Mailman!

Has there ever been a more perfect name for a potential sweet hitting outfielder?
How many "Mailman Delievers!" headlines can you imagine?
How many times in a rain soaked game can he get a big hit with the headline "Neither Rain nor Snow nor Dark of Night" headline.

If he gets into a bench clearing brawl... the headline would be "Going Postal!"

And how perfect would he be in Boston?
According to Sons of Sam Horn, his parents are big Sox fans.

Plus you'd have a Mailman in Boston... the connections to Cliff Clavin would be endless. 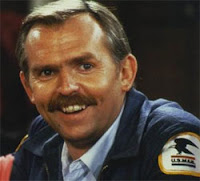 John Ratzenberger can throw out the first pitch every other night.

So we here at Sully Baseball will keep an eye out for David Mailman. He needs no nickname... not even Dave.

Get that swing going, Mailman.
Get yourself up to Fenway. Remy will interview your parents, the headlines will pile up. You are a folk hero in the making.