The coolest series of the weekend and the best argument for interleague play!

Every year during inter league play you hear the same nitwits ask the same stupid question:

Has Interleague Play lost its luster?

And those who say "yes" use the same argument.
"Who can get excited about watching the Nationals and the Mariners play? What kind of rivalry is that?"

The problem with that logic is who can get excited by the Nationals or Mariners playing ANYONE this year?

And the team anti inter league play people used to always pick on was Tampa Bay. But guess what? They are good this year and if they breezed into a National League city, those fans would see one of the most exciting teams in the AL up close.

Also it's a slow time for baseball at this point.
The season is about 1/3 old... too old to have the thrill of a new season, but not old enough to think the playoff picture is forming.

So why not inject some juice into it. OK, bad use of words. I hope Giambi isn't reading this.

And beyond the Yankees-Mets, Cubs-White Sox, A's-Giants and Dodgers-Angels match ups, sometimes you get a magical moment like Griffey's return to Seattle.

Or the coolest series of the weekend...
Both the Pirates and Orioles are hovering around .500.
Yes a big step up from rock bottom expectations but neither team has a realistic chance for a division title.

So two mediocre teams meet up in June... and played an electric series.

In the first game the Pirates built up a 6-1 lead but the Orioles chipped away and wound up taking the lead in the 6th and winning 9-6. 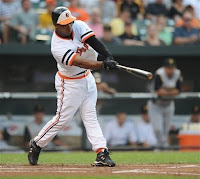 And they did it wearing the smiling bird cap that they should NEVER have stopped wearing.

Game 2 was one of those wild back and forth games that if it was a Sox/Yankees game would be put in the ESPN Classic vault.

4 homers by the Pirates, each one giving the Pirates the lead including a 2 run shot by Andy LaRoche in the 9th.

Clutch doubles by Brian Roberts and Alex Cintron and a homer by Nick Markakis to give the Orioles the lead.

A runner thrown out at the plate, a total of 3 blown saves and little used Oscar Salazar hitting a game tying homer in the bottom of the 9th... finally the game ended when Ramon Hernandez made up for being nailed at the plate in the 6th with a game ending single.

Sunday night's game was just as thrilling with the Orioles homering to come back from a 4-0 hole capped by Brian Roberts 2 out bottom of the 9th game tying shot.

The Pirates came back and won in the 10th when LaRoche again came through with an RBI single.

3 exciting games that included reunions from the 1979 World Series and lots of clips from that series and the 1971 World Series.

47,000 in the ballpark on Friday... crowds in the 30s the other days.
Electricity, memories and great baseball between two mediocre teams at the 1/3 mark in the season.