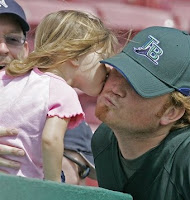 Well my call for a rivalry between the artists formerly known as the Tampa Bay Devil Rays and the Defending World Champion Boston Red Sox has been heard by the Tampa Bay Rays fans...
Both of them.

The Professor at Rays Index gave me a nice mention and it led to me being introduced to my third favorite Rays fan (after Pat and Christin of course).

Dirt Bag Fan (his given name) has started Rays the Stakes... and has also started talking smack.

And we here at Sully Baseball welcome it all.
But man let me share you one piece he posted...

I'm sure you heard every imaginable put-down during your 86 years of mediocrity.

Folks, this guy has a pair. Seriously... big hairy ones too.

86 years of mediocrity?
First of all, in case you are slow to checking on the sports section, the whole 86 years thing ended 4 years ago. And the Red Sox happened to have won another World Series since. FYI. It's like taunting Brad Pitt because he had braces in high school. He looks better now.

Secondly... mediocrity?
You do know that during those 86 years the Red Sox won 4 AL pennants, 3 more Division Titles and 3 Wild Cards.
And 24 seasons of 90 wins or more.

Let that sink in for a second. That's 90 wins in one season... not over the course of two.

And I do recall that during the last ten years the Red Sox considered trips to Tampa "padding the win column."

Thirdly... you root for a team whose GOAL is mediocrity

As the other three recent expansion teams (the Marlins, D'Backs and Rockies) all have gone to the World Series, the Rays are focused on the number that defines mediocrity:

Of course they've never even sniffed it.
The greatest year in Tampa Bay history (2004... remind me who won the World Series that year) was a 70-91 season.

The greatest height this team has soared was 3 full weeks behind mediocre.
They've had ten 90 loss seasons since 1997.

And don't blame it on payroll and unfair economics.
The 2002 and 2003 Montreal Expos had winning seasons and they didn't even have an owner! And if you can believe it played in a worse stadium and drew fewer fans!

I wish your team luck.
Maybe this year you can soar to mediocrity and the idea of there being ten great moments in your history wouldn't seem so silly.

Man, this is cool!
BAD BLOOD WITH TAMPA!