While I am eating this crow, I have a question for Yankee fans

I know as a Red Sox fan and one who has taken too much glee from Yankee losses and was a smidge hard on them during my HBO appearances that when I start to talk about the Yankees and dispense advice, I need to walk carefully.

In fact I need to watch every step like Indiana Jones walking in that temple at the beginning of Raiders where stepping on the wrong rock meant a dart in the ankle.

Even my constructive criticism of the handling of Joba Chamberlain was attacked by one of my good friends.

But I am going to proceed with caution anyhow.

I thought last year that Mike Mussina was toast, and I made my opinion clear.

He was in his late 30s, 3 of the previous 4 seasons were disappointing and 2007 was a disaster. He pitched his way out of the rotation and finished with an ERA in the 5's.

He was old, expensive and fading. He was worthless.

And now with today's win in Houston he has run up a 10-4 record with a respectable sub 4 ERA. He's pitched well his last 4 games and has been surprisingly effective and durable since the disastrous 2/3 of an inning start against Baltimore on May 20th.

He has value.
And his contract is up at the end of the year.

Here's what I think the Yankees should do with him... and I say this as a baseball observer and not a Red Sox fan.

They should trade him... right now.

(Sully prepares for the flurry of angry posts calling me a classless Boston fan.)

Seriously... think about it.
This is supposedly a transition year for the Yankees.
Why else would they not make a trade for Johan Santana?

Why else would the regular season be treated as Joba Chamberlain's private spring training?

Yeah yeah yeah I know... the Yankees never rebuild... they go for it every year... Prince Hank Steinbrenner wouldn't allow it to happen... not in the last year of the Stadium.

I'm not talking about trading away Jeter, A-Rod, Rivera, Johnny Damon or some other keystone of the team.

I'm not even talking about trading away Phil Hughes and his fake injury.

If this is a transition year, then make a transition!
Mussina isn't coming back next year. That's a given. So clearly he isn't a part of any long term solution.

And if it looks like he has recaptured a little magic, why not sell high when any Yankee fan knows another 2/3 of an inning performance might be around the corner.

Pettite and Wang are pitching well and between Rasner, Joba and a guy off the scrap heap like Freddie Garcia, the Yankees could have a 5 man rotation for the transition.

The National League is all bunched together and the Phillies, Dodgers, Cardinals, Brewers and yes even the Mets all could be a starting pitcher away from a pennant winner.

Imagine prying loose a young player from them. A player that might be a year or two away but comes up big when called up.

Imagine its 2010 and a dynamic new outfielder, or first baseman, or reliever is up from Scranton and sparking excitement in the new Yankee Stadium.

And all of you Yankee fans are asking "Where did THIS guy come from?" And someone replies "They got him for Mike Mussina back in 2008!"

And everyone would laugh and say "What a steal! Cashman is a genius! Too bad Hank fired him right after the 2008 All Star Break."

I say it is all reward and no risk.
This is the last moment of value for him, and if this is a one step back to take two steps forward than dealing Mussina makes all the sense in the world.

So I ask you, Kat O'Brien and my friends at the Newsday blog... would you try and entice a National League team now?

How about you, Pride of the Yankees? Are you willing to bet that Mussina's last 3 1/2 months as a Yankee will be at this level and the Yanks are truly a championship level team?

Would the folks at Bronx Banter see the long term advantages of trying to fleece an NL team taking advantage of parity?

Does Charlie at the brilliantly named Chuck Knoblog think that the Yankees could benefit from a complete focus on the future the way my Red Sox didn't trade away youth in 2006 to have it benefit in 2007 and beyond?

Well you are not 100% wrong there. (Although I did say the Yankees ARE making the playoffs.)

But I also say as an objective baseball fan that maybe... just maybe... there is a chance to inject a new young Yankee star into the mix.

Let me ask you, Chris DeLuca... wouldn't you like to erase the Jay Buhner for Ken Phelps deal? 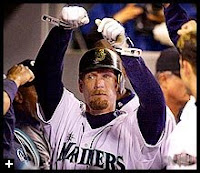