Just your typical day at Fenway 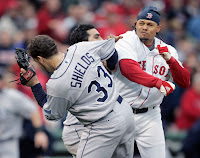 The standard script...
Manny homers (OK, that IS standard)
Coco charges the mound
Shields swinging and missing
TWO piles of players punching
Manny and Youk fighting in the dugout
Ellsbury hurt and the entire outfield having to shift
Chris Carter scores a run before he takes the field or hits in a major league
game... then smacks 2 hits on his own
And Coco basically calling out Carl Crawford for fighting like a girl

Oh yeah, the Red Sox completed a sweep of the team they were chasing, outscoring
them 12-2 in the last two games.

Folks, this looks like a rivalry.
Circle June 30 on your calendar!

TAMPA AND BOSTON... things are heating up!