I have NO CLUE what the Yankees should do

I want to thank Aziz at Pride of the Yankees and Nate at Chuck Knoblog for addressing my Mike Mussina trade proposal.

Their thoughts were well written and thought out but the argument is moot since Wang's injury has probably ended his season.


I am CLUELESS of what the Yankees should do.

They physically need 5 starting pitchers. At this point it is Mussina, Pettite, Joba, Giese... and... um... is Denny Neagle available?

The fact that previous Yankee busts like Jeff Weaver and Sidney Ponson can be floated by with a straight face really makes this interesting.

Sabathia isn't coming.
First of all, Cashman knows that if he packages off Kennedy in the Sabathia trade he will be admitting that he was wrong in the Santana deal. Which one would you rather have?

Secondly other teams have better trade chips to offer (the Yankees prime chips, Kennedy and Hughes, are hurt after flopping in the show). Both Los Angeles teams have more major league talent to deal

It reminds me of the 2006 Red Sox when the rotation was in such tatters that when the kid from the Make a Wish foundation threw out the first pitch, Francona would ask him "Um could you stay on the mound and give us 4 or 5 innings?"

But of course in 2006 I was angry that Theo didn't get reinforcements and kept these worthless minor leaguers like Clay Buchholz, Dustin Pedroia, Manny DelCarmen and Jacoby Ellsbury.

But the AL Wild Card race is wide open.
Does anyone think the Rays are going to keep this up?
Or that the Tigers pitching will turn around?
Or the A's will play at this level?

The Yankees could still make the post season... with the team in its current state

It's all very interesting. 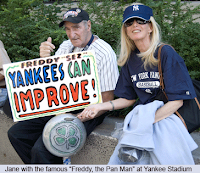