We interrupt the baseball discussion to say...

LEON POWE?
Are you kidding me?

And a quick note to some of my fellow Red Sox/Celtics fan friends.
Please spare me the "I hope we win at home" sentiment.

In other words they were kind of saddened by THE RED SOX SWEEPING THE WORLD SERIES!!!!

Someone asked me last October when the Sox went up 2-0 (thanks to a nifty Papelbon pick off move) "Wouldn't you rather see the Red Sox win in Fenway?"

I countered with the question "What game am I supposed to be rooting AGAINST the Red Sox?"

In order to be rooting for a six game series, by definition I am rooting for my team to lose two.

It applies to the Celtics series.
I want a sweep.
I want four games and done.
I want Dyan Cannon to be very sad. Nothing against Ms Cannon. She's great in Heaven Can Wait.

But I will be rooting for the Celtics every night they play... ergo I am rooting for 4 and out.

Trust me, the title wasn't any less special for the Red Sox when they celebrated in St. Louis or Denver.

LET'S GO CELTICS
(And Leon Powe for that matter.)

OK, we now return to baseball discussion, already in progress. 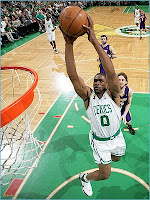