My favorite pairing of courtside celebrities at the Laker/Celtics game 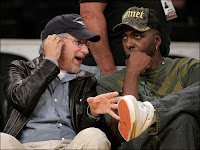 Steven Spielberg and John Salley! And Spielberg is evidently talking Salley's ear off.

SPIELBERG: I really think that the Piston teams had such an extraordinary bench. When you think about you think about a starting 5 with Isiah, Dumars, Lambier, Dantley and Aguirre... and you'd have Rodman, Edwards, Mahorn, Vinnie the Microwave Johnson and yourself coming off the bench. I mean you'd constantly be putting a playoff caliber rotation out there. I know the Jordan Bulls teams won more games, but I'd take that 1989 team in ANY head to head matchup.