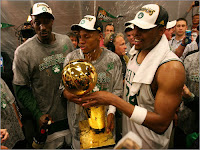 I woke up this morning and the Celtics were still NBA Champs!

There were so many amazing things about last night that the only thing I can do is list them...

- The Celtics won the NBA Title.
I am savoring it. When I was younger during the Bird/McHale/Parish years it seemed like the Celtics were going to be in the Finals every year... or at least have a 76ers or Pistons stop them in the Conference Finals.

I never thought it would be 22 years... 22 years?
Kids born when the Celtics beat the Rockets in 1986 are now graduating from college.

How do you lose by nearly 40 when your season is on the line?
20 would be bad enough.

I called Michael Bernard, one of the biggest and most loyal Celtic fans I know, after the third quarter when it was 89-60. He said "This might be an interesting experiment. Don't have the Celtics shoot. Just dribble the ball out for 24 seconds each possession and hold the Lakers to 28 points to win."

Instead the Celtics put up 42 4th quarter points and getting nearly 15 minutes of playing time for Glen "Big Baby" Davis.


- It was the Lakers

It isn't enough that my team is happy... someone else's team needs to be miserable.
The Celtics putting on the biggest ass whippin' elimination game in history would have been awesome if it were against the Hornets.

And, like in 2004 when I was in New York during the greatest fold in baseball playoff history, I'm in LA.

I get to read the local papers who trashed the Celtics before the series and whined about Paul Pierce getting a wheel chair grumble about their team.

I'm not saying I am proud of that part of my personality that loves to see teams squirm... but I admit it is there.


- The Celtic greats who were in attendance

Russell, Havlicek and Heinsohn were all there. I'm sure there were more as they were on the court celebrating with the others.

It was like an initiation to live on Mount Olympus.
Whenever there is a gathering of Celtic greats, Pierce-Garnett-Allen et al are invited until their beard is whiter than Russell's.

I went with Kenny Mack, a buddy of mine from Junior High... the last time the Celtics won, to Sonny's to celebrate with our people.

High fives, hugs from total strangers and chanting Beat LA was the order of business.

One guy hugged me, stopped and said "You were in Curse of the Bambino."

It was fun looking around and seeing the people my age and older who had experienced Celtics titles before so happy that we can celebrate another one.

And it was also great seeing the faces of the younger fans who never had this moment and was probably sick of hearing about how great the past was.

And then there were a lot of guys named Murph and Fitzy who were just drunk.

OK, enough basketball for now.
The Celtics are the champs... along with the Red Sox and the Giants, so I got 3 out of 4 of my Championship Grand Slam