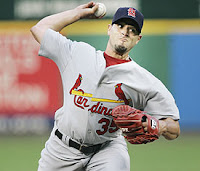 After weeks of speculation that Bengie Molina was heading to Queens, he wound up going back to the Giants... for reasons that I listed earlier.

Well Joel Pineiro was supposed to be heading to the Mets... and he signed on with the Angels.

Now as Rob Neyer pointed out, who knows which Pineiro will show up to Anaheim, the pitcher with the ERA north of 5 in Seattle or the but kicker in St. Louis whose career was revived by the magical Dave Duncan.

Either way, he said thanks but no thanks to the Mets and moved on to the Angels.

It's been that kind of off season for the Mets. Even PITCHERS are forsaking them. They play in a pitchers park in the weaker hitting National League.

And Pineiro basically said "thanks Mets... but I'm going back to the league where I posted an ERA over 5.00 the last 2 and a half seasons I played there."