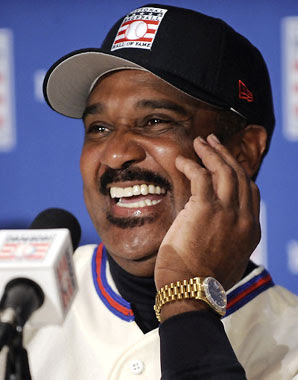 Every year from 1995 to last January I got emotionally caught up in the Hall of Fame announcement. One of my childhood heroes was up for election, Jim Rice.

I was a year out of college and toying with idea of becoming a stand up comic.

Since then I did comedy, lived in New York for another 10 years, made short films, produced for The Daily Show, appeared on HBO, made a movie, appeared on HBO again, appeared on NESN, got married, became a father of two, moved to the Bay Area, appeared on Monk, got an Emmy nomination, wrote for Dennis Miller, moved to L.A., produced a show in Sturgis SD... and all the while kept waiting for Jim Rice to be elected.

The only anticipation I can equate to that was waiting between 1980 and 1983 for Return of the Jedi to come out.

Yeah that was only 3 years, but I was an 8 year old kid when Han Solo got frozen in carbonite and nobody knew if Darth Vader was lying about being Luke's father.

When I finally saw Jedi at the Chestnut Hill Theater, I had spent nearly 1/3 of my life in agonizing anticipation.

And after I saw it 5 times that summer, there was a little let down.

Summer movies no longer had the anticipation they had before Luke took down Jabba the Hutt.

Oh yeah, Ghostbusters and Back to the Future and Temple of Doom were all cool, but the build up was not the same.

I am feeling that way about this Hall of Fame ballot.

Yeah I made my case for Bert Blyleven... but I don't have the same emotion about Blyleven as I do about Rice.

I'd like to see Barry Larkin, Jack Morris, Robbie Alomar or Dave Parker get in... but I really won't lose any sleep if they don't get in.

I'd be eager to see if David Segui, Shane Reynolds or Todd Zeile get that strange sympathy vote that some players get.

But without that one guy to get emotionally behind, it feels a little strange... like a tremor in the force. 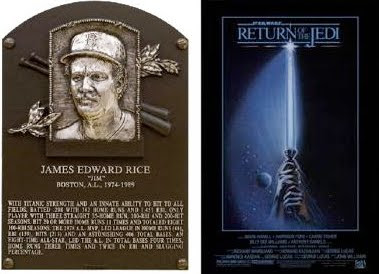 Email ThisBlogThis!Share to TwitterShare to FacebookShare to Pinterest
Labels: Hall of Fame, Jim Rice, Return of the Jedi