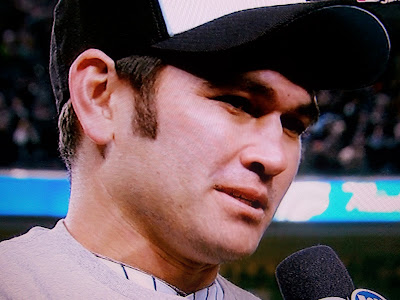 Seriously. Sign him.
It looks like he isn't going back to the Yankees.
The Red Sox aren't bringing him back and chances are the Angels, Mariners and Cubs aren't in the running.

Where is he going? St. Louis?

The guy is a winner, he would be a great spark plug and this would be a new challenge for him after winning on both sides of the great Red Sox/Yankee rivalry to win in San Francisco.

Besides, he is exactly the kind of offensive player they need. They aren't getting a big power hitter to come to San Francisco and see their home run totals tumble.

They need a guy like Damon who can hit a ball into the gap and take two. (Don't be fooled by his inflated home run total last year... he was taking advantage of the wind tunnel in the new Yankee Stadium.)

He'd be a perfect fit in San Francisco. And spare me any concerns for his defense. The Giants trotted out Barry Bonds all of those years when he had worse range than the statue of Willie Mays outside of the ballpark.

Giants, sign him already. Offer him a 2 year deal. Who exactly are you bidding against?

And Johnny... go to the Giants. You are a perfect fit there.
Who knows? You might be able to grow your beard back!