David Segui got a vote? Sure, why not?

Each year there is a sympathy vote given here and there to a player for the Hall of Fame.

Jay Buhner got a vote in 2007… no doubt from a sports writer who thought Jay was a hell of a nice guy.

Now one of these years, some player will buy 405 sports writers a lobster dinner and have them throw in a “he’s a hell of a nice guy” vote and we’ll see someone like Bobby Higginson in the Hall of Fame… but I digress.

David Segui got a single vote this year, and it is no doubt bewildering to some. Mike over at The Sport’s Pig Blog demands to know who it was.

But I think in a way, as a protest vote, it kind of makes sense.

Not in terms of his stats. He played 150 games once over a 15 year career. Hit over 20 homers once. He never once sniffed an All Star Game.

He was a good .291 career hitter with a career OPS of .802 which I think is good. But nothing special.

And if anyone knows anything about Segui, it was he was a juicer.

And frankly he isn’t the best advertisement for ‘roids use. If a talented hitter was on the juice, shouldn’t they be putting up massive numbers… like McGwire or Rafael Palmeiro.

But what did David do that McGwire, Palmeiro, Bonds, Clemens et al didn’t?

And in the end, isn’t that what people are pissed about regarding the ‘roids? Being lied to.

When A-Rod and Pettite admitted to being juicers, didn’t people start to move on? 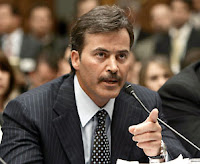 What they did was the same as Clemens and Palmeiro did…

and they didn’t wag their finger at Congress.

(Isn’t it odd that Jose Canseco dropped off of the ballot so quickly and yet Mark McGwire is sticking around?)

Maybe the vote for Segui was a vote for “just admitting it.”

Oh who am I kidding? He was a mediocre player and some writer lost his damn mind.