Getting ready for kick off... thinking about the 1986 World Series 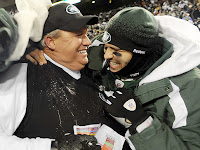 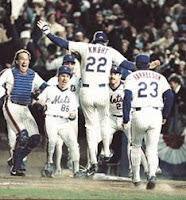 OF COURSE I am thinking about the 1986 World Series... what else would I be thinking about as the games deciding the Super Bowl berths are about to be played.

But I am not thinking about it for the reasons that you would think.

Then I lamented the great flop of 1986 when I thought of Jim Rice's candidacy for the Hall of Fame. Had the Red Sox won in 1986, I argued, Rice would have been in the Hall of Fame on the first ballot. He didn't have Ted's stats or Yaz's stats... but the Sox would have won when Rice was captain.

But today's Jets game got me thinking about that fateful 10th inning. 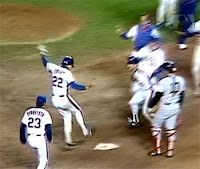 The Mets and Jets are very similar franchises... and not just because their names rhyme.

They are second banana franchises in their own cities. The Yankees own the baseball scene and the Giants have always had a bigger following.

They both have had their share of heart break and dysfunction over the years.

Both have fan bases that have listened to Yankee fans and Giant fans crow about their more recent titles. The Yankees with their 27 titles and the Giants with Super Bowl titles in the 1980s, 1990s and 2000s.

And of course they each had, over a period of 9 months in 1969, a startling championship that defined their franchise to this very day.

Both seemed beyond the realm of possibility... the AFL was supposed to be inferior to the NFL and the Super Bowl had been a lackluster joke in its first two games.

And of course the Mets averaged a 56-106 record for each of its first seven seasons.

Both teams rode the back of a brash new superstar... Broadway Joe predicting the outcome by the poolside...

Tom Terrific mowing down NL batters left and right heading into the Series.


And oddly, they both beat heavily favored teams that played in Baltimore.

Now there is one huge difference between the franchises:

The Jets have never won since. The Mets have... one other time.

The Mets have that, for them, Amazin' moment of coming back from 2 runs down, 2 outs, nobody on in the 10th that was so beautifully recreated in this video game.

Imagine if Gary Carter made an out... or Kevin Mitchell made an out... or Schraldi got that third strike on Ray Knight... or Mookie Wilson swung and missed on one of his 2 strike foul balls against Bob Stanley.

But I always thought of the Red Sox side... for the Mets, they would still be pining for 1969.

All the while clinging to their lone moment of glory in 1969.

Kind of like the Jets do now, still waiting for that second great highlight to go with Joe Willy Namath running off the field, finger in the air. 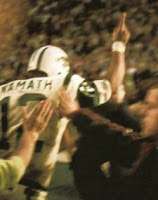