The A’s signing Ben Sheets makes even LESS sense to me today!

OK, let’s say you are the Oakland A’s… you don’t often sign players to salaries higher than the milk shake guy at In and Out Burger… and the few times you do, the results aren’t pretty. (How’s that Eric Chavez signing looking?)

But for whatever reason you find $10 million to spend on the 2010 roster. (Perhaps you found a suit that had a $10 million bill in the breast pocket.

They need pitching depth and two pitchers are still hanging around, unsigned, in late January.

One just turned 30, has thrown 190 innings or more each of the last 8 seasons. Consistently gets double digit wins. Consistently starts 30+ games. And has experience in several pennant races including playing a big part in a World Series run where he threw a complete game playoff win. Last year he logged in 204 innings, made 33 starts and pitched well down the stretch drive for a playoff team.

The other one is a year older, has more health issues than Amy Winehouse and pitched in as many games as her last year… which would be zero. He hasn’t logged in 200 innings nor made 30 starts for the past 5 seasons. He has no post season experience and has played only two seasons for teams with a winning record. His talent is undeniable but so is his inability to stay on the roster. He is a “Placed on the 60 Day Disabled List” entry waiting to happen.

Which one of those two would you spend the money on? ESPECIALLY seeing that you can’t afford to have much payroll in the trainers room or on rehab assignment in Kane County. 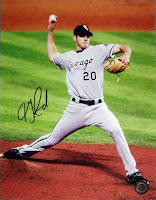 And guess what? Garland signed for $4.7 million LESS. The Padres are all but guaranteed lots of innings, lots of starts and a stable veteran while the A’s will be paying for Ben Sheets to sit in the whirlpool.

How does this make ANY sense?

It’s not like the Padres are going to be a contender. They had the same record as the A’s did last year (75-87) and San Diego will probably be dumping high salary players at the deadline once again.

So why couldn’t the A’s offer… oh I don’t know… $6 million for Garland and have an extra $4 million to throw around.

The Yankees claim to be only offering $2 million to Damon. Offer him $3 million and suddenly everyone will be saying “Hey! The A’s out bid the Yankees! That’s good for baseball!”