The Winter Classic once again was great.

Seeing hockey in Fenway Park was nothing short of surreal (and if anything was messed up in the outfield, they have months to fix it.)

We've now had outdoor hockey in Edmonton, Buffalo, Chicago and Boston which is very cool (in all meanings of that word.)

But I think the NHL should add a second outdoor game... call it the Valentine's Day Special. It will be a love letter to big hockey fans.

Here's how it works:

Take two franchises that play in warm weather cities (and are probably keeping their noses barely above the unfrozen water.)

For purposes of this suggestion, let's say the Atlanta Thrashers and the Nashville Predators... two teams that aren't exactly packing them in.

Schedule a game on February 14th between the Thrashers and the Predators.

But not below the Mason - Dixon Line... in fact don't even put it on American Soil!

At first I was going to say Winnipeg or Quebec City, whose teams were taken away.

But then I thought a team that NEVER had an NHL team would go bananas for a regular season NHL game. 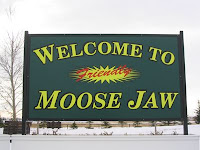 That's right. I am proposing for one game, two Southern teams who could be contracted are welcomed like heroes with a parade down the heart of The Friendly City!

After a parade and a rally where fans pick which team they'll root for it will be time for the game.

But NOT at the Civic Center, home of the Moose Jaw Warriors...

The teams will travel 35 kilometer away to Old Wives Lake... which should be frozen solid on February 14.

And yes, we will play NHL hockey on a pond, as it was meant to be!

Yeah I know it is a wild life preserve, but the birds can make room for screaming Moose Jaw fans for one day! Besides, the smart birds will have flown to Atlanta or Nashville for the winter. Consider it a swap with the Thrashers and the Predators!

And if there is a crack in the ice and a player falls in... or a bear attacks Ilya Kovalchuk in the penalty box... SO BE IT!

HOW CAN THIS NOT SUCCEED????