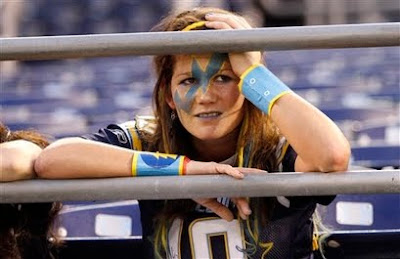 It's funny... I have written several times about Cleveland sports fans and how I can't imagine their misery.

I gave the fans of Cleveland advice when the Cavs lost to Orlando and if the Red Sox or Celtics are not involved... I ALWAYS root for the Cleveland team.

Keeping all of that in mind, I wonder why I don't have the same sympathy towards San Diego and their sports fans.

In 2008 I wrote about San Diego sports misery and was snarky when I observed how bad can it be with such beautiful weather?

But I am having second thoughts.

Here's the post I wrote in 2008... and I break down the heart break that Padres fans have endured.

The most accurate field goal kicker in the league misses three? Including 2 gimmes? And they lose at home by 3 to a seemingly overmatched Jets team who had trouble making a first down?

The great Lee Hacksaw Hamilton wrote a piece this morning which breaks down where yesterday's debacle ranks among Chargers playoff disasters.

I may have to reevaluate my stance.

Cleveland, Seattle,Buffalo and now San Diego might have to be considered an axis of failure.
San Diego still has the nicest weather of those cities.